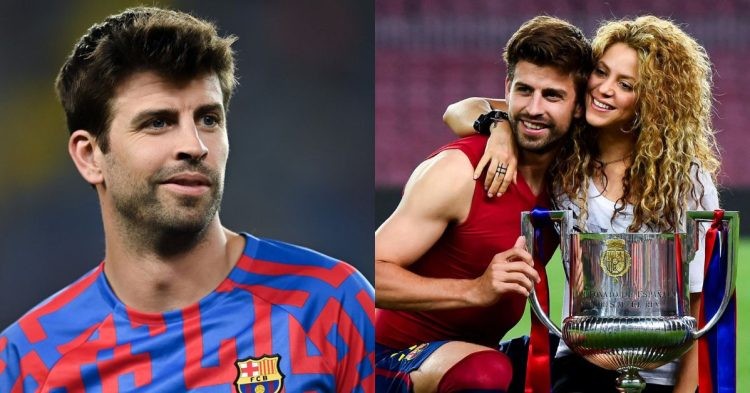 Gerard Pique has been in the news since June this year. He was one of the longest-serving Barcelona players at the time and is still popular amongst their fans. In June, Pique and Shakira announced their split after nearly 11 years of being together. They have two children, Milan (9) and Sasha (7). The two had met in Madrid for the shooting of the 2010 World Cup song ‘Waka Waka’.

Gerard Piqué first met with Shakira to appear in the music video for Waka Waka. He then made a promise….

“I knew she’d be at the closing ceremony so I said to her: ‘If I have to reach the World Cup final to see you again, I’ll make sure Spain make it.'” [UEFA] pic.twitter.com/hUXdswNAPD

The reported reason for the couple splitting up was Pique cheating on Shakira. Pique reportedly was involved in a relationship with 23-year-old PR student Clara Chia Marti. Clara Chia also reportedly worked at Pique’s PR firm Kosmos holdings. With everything going on surrounding Pique and Shakira’s split, Pique has become the eighth most searched athlete on the planet.

Gerard Pique started dating Clara Chia Marti earlier this year. He was reported to be in a relationship with her while he was still in a relationship with Shakira. The attention seemed to have taken a toll on Clara Chia at one point. She refused to go to work for a while when the story was at its most controversial moment. But ever since then she seems to have gotten used to the media attention.

After Pique and Shakira’s agreement for their children’s custody, the latter is set to move to Miami. Clara Chia was set to move into Shakira and Pique’s $14 million family home, but Shakira decided to sell the house instead. Pique and Clara Chia currently live in a penthouse in Barcelona. Shakira and Pique’s kids will spend Christmas in Barcelona, and then move to Miami with their mother.

Shakira’s popularity is massive in comparison to Pique. She has become popular in the world of soccer, not only because she was married to Pique, but also because of her World Cup songs. ‘Waka Waka’ and ‘La La La’ have a combined total of 4.5 billion views on YouTube. Her opening ceremony performances in 2010 and 2014 have become iconic moments in the World Cup.

On Instagram, she has 77.6 million followers and on Twitter, she has 53.2 million followers. She is undoubtedly one of the big reasons for Pique to be the eighth most-searched athlete in 2022. She will now move to Miami with her two sons after Christmas. The two will be hoping this whirlwind chapter in their life will finally be closed.