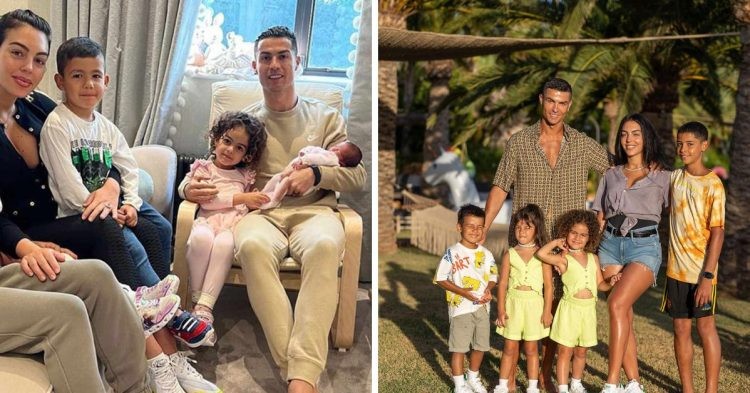 Being one of Cristiano Ronaldo’s kids would be a dream come true for any soccer-mad child today, as having a dad who is one of the greatest soccer players in the world is a privilege few possess. Here, we invite you to get to know the fortunate offspring of the Portuguese superstar.

Cristiano has always displayed immense affection for his family, expressing his admiration for his late father and cherishing his mother. It is likely that this strong bond with his relatives was a factor in his choice to build a large family.

Cristiano Ronaldo is very open about his affection for his significant other Georgina Rodriguez and their ever-growing family. The two have been together since 2016 when they first encountered each other at the Gucci store where Georgina Rodriguez used to be employed. Ronaldo and Rodriguez regularly post about their love for each other on social media, as well as giving us a peek into their household.

Altogether, Cristiano has a brood of five – Cristiano Ronaldo Jr., Alana Martina, Eva María, Mateo Ronaldo, and Bella Esmeralda. These are the five kids of the soccer superstar.

On June 17th, 2010, Portuguese soccer star Cristiano Ronaldo became a first-time father when his son, Cristiano Ronaldo Jr., was born. He has kept the identity of the baby’s mother a secret and has asked the public to respect his decision and not speculate on the matter. He also has full custody of the child and stated that if his son ever inquires about his mother, Ronaldo himself will provide the answers.

Cristiano Ronaldo Jr. is the most popular of El Bicho’s children, as he is the one who accompanies his father to public events and the only one who is currently following in his footsteps in terms of athletic pursuits. He is quite the character and charming despite having a shy personality.

Ronaldo Jr. joined the Under-12 squad of an English club during the summer transfer in 2021. His dad, Ronaldo, transferred back to Old Trafford for a fee of $22 million that August.

The legendary soccer player has expressed his hopes that his son will follow in his footsteps. Dos Santos Aveiro, the athlete’s grandmother, is certain that her grandson has even more talent than his father did at the same age and expects great things from him in the future.

Mateo Ronaldo is the second child of soccer superstar Cristiano Ronaldo. He was born on June 8, 2017, through a surrogate. Mateo is currently 6 years old and is said to be a playful and happy child. Mateo is often seen in pictures and videos shared by his father on social media, showing off his playful and cheerful personality. He is also seen spending time with his older brother and his two younger sisters, Alana Martina and Eva Maria.

Despite his busy schedule as a professional soccer player, Ronaldo makes sure to spend quality time with his children. He often shares pictures and videos of Mateo on his social media accounts, showing off his cute and playful personality. His children are his number one priority and it’s clear to see the love and affection he has for them.

As Mateo is still a young child, it is not clear what his interests and hobbies are at this point. However, it is likely that he will follow in his father’s footsteps and develop an interest in soccer as he grows older. Cristiano Ronaldo is known to be very close to his children and it is likely that he will support Mateo in whatever interests he chooses to pursue in the future.

Eva Maria dos Santos is the daughter of renowned soccer player Cristiano Ronaldo and she is the twin sister of Mateo. Their arrival into the world made for quite a headline in newspapers, as it was reported that Eva and Mateo were conceived through frozen embryos in a surrogacy clinic.

It was kept confidential who their mother was, similar to the mother of Ronaldo’s older stepchild, Cristiano Jr. Ronaldo was unfortunately unable to be present for the twins’ birth as he was playing a soccer match and was also at the center of a legal case. Eva and Mateo have a younger sister, Alana, who is the first child of Ronaldo and his girlfriend, Georgina.

Ronaldo revealed the arrival of Eva and Mateo with a post on Instagram, showing him embracing the newborns. Regrettably, he was engaged with the Portuguese national team while this occurred. Simultaneously, Ronaldo was under scrutiny in Spain for alleged tax evasion.

Alana Martina Dos Santos Aveiro is the second daughter and fourth offspring of the celebrated Portuguese soccer star Cristiano Ronaldo. She is the first child of Georgina Rodriguez, although not the eldest of Ronaldo’s offspring.

Alana Martina Dos Santos Aveiro was born on November 12th, 2017, nine days prior to her due date in Madrid, Spain. Now, five years old, her zodiac sign is Scorpio. At the time of her birth, her father, Cristiano, was playing for the Spanish professional soccer club, Real Madrid.

On April 18, Cristiano Ronaldo and his partner, Georgina Rodriguez, welcomed a baby girl into the world whom they named Bella Esmeralda. However, their joy was tinged with sadness as their baby girl’s twin brother did not survive childbirth.

Georgina later posted a photograph of Bella on her Instagram profile, with the infant peacefully asleep. Unfortunately, soon after her birth, Bella went through a spell of bronchitis which made Ronaldo miss the pre-season training at Manchester United. Ronaldo himself admitted that he had spent a week in the hospital due to his daughter’s illness, which apparently the directors of the club refused to believe.

In October 2021, Cristiano and Georgina publicly revealed they were expecting twins. On April 18, 2022, Georgina welcomed two newborns into the world, but the couple sadly declared that one of the infants passed away shortly after the delivery.

They said in a statement: “It is with our deepest sadness we have to announce that our baby boy has passed away. It is the greatest pain that any parent can feel. Only the birth of our baby girl gives us the strength to live this moment with some hope and happiness. Baby boy, you are our angel. We will always love you.”

“My son’s ashes are with me, like my Daddy, they are here in the house. It is something that I want to hold for the rest of my life and not throw away,” he stated in his Piers Morgan interview. Ronaldo revealed that he keeps the ashes of his son and father in his private chapel at home. He said he wants to keep them with him forever, as opposed to throwing them into the ocean or sea.