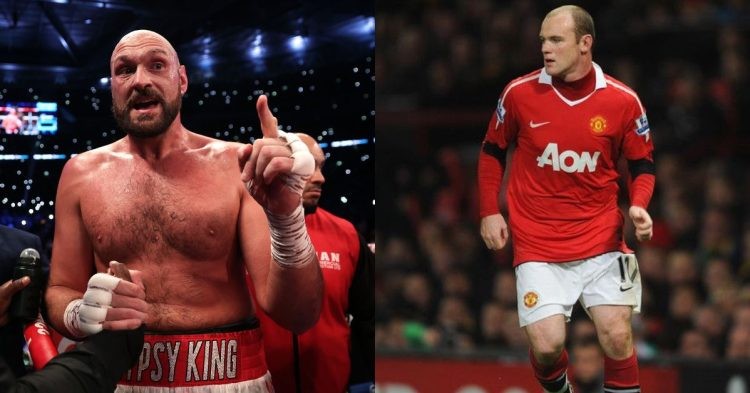 Tyson Fury is one of the greatest boxers of all time. The Gypsy King is the current WBC and Lineal heavyweight champion of the world. It looks like Manchester United legend Wayne Rooney is a huge fan of his as well.

🥊 “He’s the best we’ve seen for a long time. I don’t think anyone will beat him.”

👏 “I probably think he should be knighted, if I’m being honest.”@WayneRooney calls for @Tyson_Fury to be Knighted ⚔️ pic.twitter.com/XkEmu7jb5z

Recently, the retired soccer star mentioned that Fury should be knighted. For those who don’t know, in the United Kingdom, when someone is knighted, it means the country has recognized the person’s contributions to society and the country as a whole. He claimed that there was a high chance no one can beat Tyson. This even attracted a response from the man himself.

On talkSPORT, Tyson mentioned that Rooney could be a possible sparring partner. He said, “Wayne Rooney is a proper legend, and I grew up watching him as a youngster for England and United. So, that’s amazing, amazing speech from him.”

🤩 “Rooney is a proper legend!”

🥊 “He’s a massive boxing fan and comes from a boxing family!”

🤣 “I need somebody smaller to prepare for Usyk so, Wayne, get on the blower!”@Tyson_Fury wants @WayneRooney to help him get ready for his Usyk fight 😂 pic.twitter.com/ruvtdwMZxh

“He’s a massive boxing fan, he comes from a boxing family as well. So, hopefully, we can have a little spar in the future sometime. I do need someone smaller to prepare for Usyk. Wayne, if you’re listening, get on the blower, son!” the Gypsy King added.

Fury has mentioned that he grew up watching the Manchester United legend. This has raised soccer fans’ eyebrows, as some even believe Fury doesn’t know what he’s talking about. A fan said, “Grew up watching him? You can tell Fury doesn’t watch football.”

Grew up watching him? You can tell Fury doesn’t watch football 🤣

Hurry up Wayne and ring him , before he retires 👍👍

Tyson is 34 years old. The interesting fact is Rooney is 37 years old. When he made his debut for United, Rooney was just 18. Saying he exploded onto the scene at Old Trafford would be a major understatement. The English striker absolutely terrorized Premier League strikers during his prime. The fact that Fury claims to have witnessed is unusual for fans.

However, it might not be a huge surprise. Fury must have been about 15 years old when Rooney joined United. Hence, it would be safe for us to assume that he witnessed Rooney rocking it in the good old Barclays Premier League. That was not all from the fans. Another even mentioned Fury should get in line to fight Rooney amid the ongoing feud between the former England striker and Cristiano Ronaldo.

Despite being teammates and good friends at one point, it looks like the former United stars are not having a good time right now. Wayne gave the 5x Ballon d’Or winner a reality check when he was struggling to make it into the starting XI. That wasn’t all, Ronaldo even took a subtle dig at his old teammate by calling him a rat. It seems like Ronaldo vs Rooney is a fight fans want to witness after all.