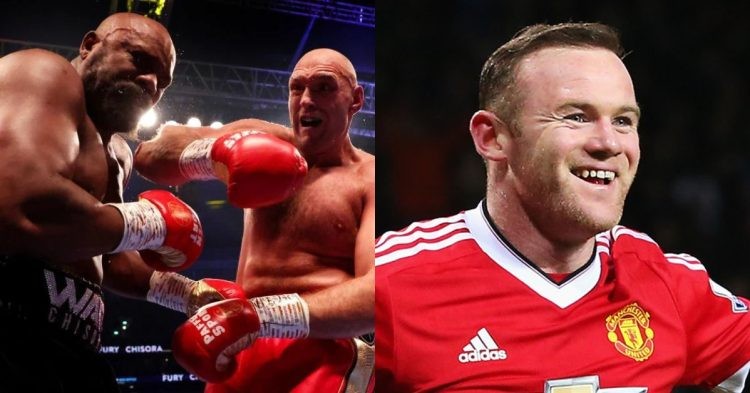 When the war is complete we break bread. Five Guys with @Tyson_Fury 🍔 pic.twitter.com/eJVuLd7sXB

Wayne Rooney is arguably one of the best players Manchester United has ever seen. Breaking through the ranks of Everton, he was quickly scouted and signed by Sir Alex Ferguson. He has made 393 appearances and scored 183 goals for United in the Premier League. He currently manages DC United in the MLS.

The fight was fought at the billion-dollar Tottenham Hotspur stadium in London. Fury retained his heavyweight title in the tenth round. It was clear by the ninth round that Chisora had lost the bout, but the 38-year-old fighter came out for another round. It did not take long for Fury to finish the match once the tenth round began, with the referee stopping the fight, and awarding the win to Fury.

Wayne Rooney spoke to talkSPORT afterward, regarding Fury’s comprehensive win over Chisora. He was ringside during the match, and said, “He’s the best we’ve seen for a long time, I don’t think anyone will beat him. He’s an absolute legend, his skills are incredible. Being honest, I probably think he should be knighted.”

🥊 “He’s the best we’ve seen for a long time. I don’t think anyone will beat him.”

👏 “I probably think he should be knighted, if I’m being honest.”@WayneRooney calls for @Tyson_Fury to be Knighted ⚔️ pic.twitter.com/XkEmu7jb5z

The ex-Manchester United forward wanted Fury to be knighted because of his services to the sport of boxing. Rooney continued his praise for the heavyweight champion, “He hasn’t been afraid to go abroad, he’s won titles abroad, defended them abroad. He sums up and optimizes everything boxing is.”

Although Fury had hinted at retirement earlier this year, he came out and fought Chisora. Additionally, Fury said he might be part of some other fights in the near future. Despite his outstanding record, there are many who feel Fury is not one of the greatest boxers in history.