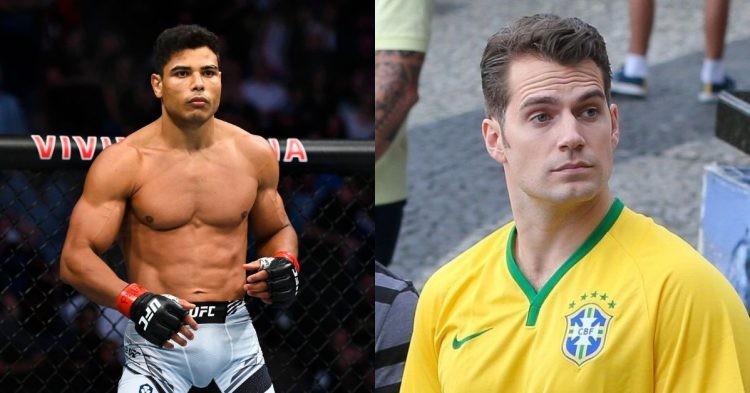 Hollywood actor Henry Cavill donned a Brazil jersey once upon a time and his picture has come back to create a comical invasion accusation. Brazilian professional mixed martial artist, Paolo Costa, tweeted a picture of Brazil’s unrest alongside Cavill’s picture in a Brazil jersey. He captioned it, “This peoples invaded Brazilian capitol today. Great day.”

Costa, who competes in the Middleweight division in the Ultimate Fighting Championship (UFC), is famous for his wild and funny tweets. With the profile name “Paulo Costa ( Borrachinha )”, he has earned more than 440,000 followers. As of August 1, 2022, 31-year-old Costa is #6 in the UFC middleweight rankings. He is also a Black belt in Brazilian Jiu-Jitsu.

In his latest comical tweet, Costa is seen saying Cavill was one of the members in the protest at the National Congress in Brasilia. A picture had been released of thousands of supporters of Brazil’s ousted former president, Jair Bolsonaro, storming Brazil’s Congress on Sunday. They are protesting a claim that the election was rigged and that Bolsonaro had been removed illegally.

A fan commented on the tweet saying, “The wildness of your tweets is truly something special.” Another fan even asked Paulo if he would be running for the role of Brazil’s president

Why was Henry Cavill wearing a Brazil soccer jersey?

Former Superman Cavill possesses many attractive traits. One among them is his devotion to his craft. You can see him go out of his way to bring about perfection in the tasks he performs. No wonder he is also pinned by many on the internet as the next worthy James Bond.

From Superman in the DC movies to the Geralt of Rivia in The Witcher, Cavill has played every character immaculately. It was not a surprise to see him go out of his way in 2015 to promote his movie titled The Man from U.N.C.L.E.

The Man from U.N.C.L.E directed by Guy Ritchie is based on the iconic 90s show of the same name. Ritchie wrote the screenplay with Lionel Wigram. The movie had a star-studded cast with Armie Hamme, and Alicia Vikander joining Cavill.

Cavill was near Sugarloaf Mountain in Brazil promoting his movie. He was taking pictures with fans wearing the iconic yellow of Brazil’s soccer jersey. He probably even made Brazil’s very own superstar Neymar Jr. jealous. As the actor had worn a customized number 10 Brazil Jersey. The iconic number 10 Brazil soccer jersey, however, is Neymar Jr’s trademark.