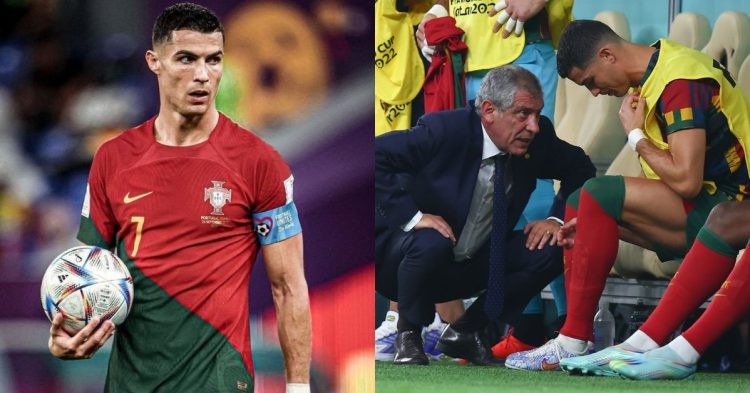 Cristiano Ronaldo has been having a rollercoaster of a ride in the last few months. He had quite an eventful time at Manchester United and it seems like it’s continuing with Portugal as well. For those who don’t know, Portugal’s head coach Fernando Santos decided to leave Ronaldo on the bench for the round of 16 match against Switzerland.

The decision was quite bold if we’re being honest, it’s not every day you see the skipper, who has over 100 international goals, on the bench. But it looks like that decision might have paid off after all. Ronaldo‘s replacement, Goncalo Ramos, bagged a sensational hat-trick on the night to help Portugal to a 6-1 over the Swiss national team.

Fernando Santos on Ronaldo benched: “Cristiano has shown that he is a professional of choice and a captain of a handful. He didn’t create any problem, really”. 🇵🇹 #Qatar2022

“We spoke before the game and he had no issue with my decision. Cristiano’s an example”. pic.twitter.com/tF0V8cvnC9

After the game, Santos commented on his decision to leave Ronaldo out of the starting lineup. According to Fabrizio Romano, he said, “Cristiano and Ramos are different players. There is no problem with the captain of the national team. We’ve been friends for many years. He set the example of a captain.” In addition to that, Santos claimed that Ronaldo had no issue with his decision when they spoke before the game.

Santos’ explanation did not go down well with soccer fans. Many have had a go at the Portuguese coach for the way he explained Ronaldo’s absence from the team. A fan tweeted, “Taking play time away from a player who is most likely playing in his last World Cup then telling the press “he’s had no issue…he’s an example” is more disrespectful than benching him.”

Am a Messi fan but it’s a shame to see the treatment Ronaldo has been getting. He has done so much for football both home and abroad. I expect better from his own national team. It’s so sad to see how soon we forget what someone has done for us. My respect to Ronaldo

Cristiano Ronaldo is a legend and no matter what he deserves to be playing XI no matter which teams he plays for. He has given so much to Portugal the. Coach Santos can imagine. Coach Santos should know Cristiano is the MAN he needs to win the word cup!

FernandoSantos. At this point ronaldo. Leaving him out of feels extremely disrespectful and borderline bullying @Cristiano @433 @FabrizioRomano @selecaoportugal

That was all Ten hag needed to do, talk to him before throwing him on the bench 😆, and not try to use him to while away time against Spurs

Many have publicly supported Ronaldo after Santos claimed that there was no issues. Some have drawn comparisons to Ronaldo’s situation at Man Utd with Erik ten Hag. For context, ten Hag claimed that Ronaldo was important, but went on to leave him on the bench. Fans were furious about this decision.

Fans claim that out of respect for the 5x Ballon d’Or winner’s illustrious career, ten Hag could have had a talk with the player before leaving him on the bench. That could have been one of the reasons why Ronaldo declared hat he did not respect his club manager. Now, he’s a free agent and is reported to sign with a club after the FIFA World Cup.