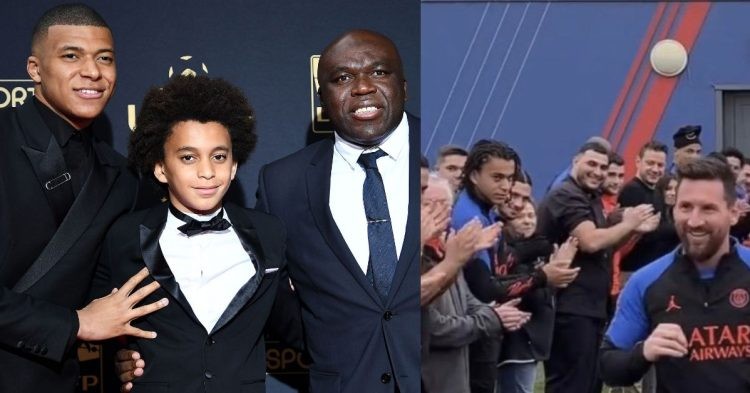 Soccer fans were appalled to see Kylian Mbappe‘s little brother, Ethan Mbappe’s reaction to Lionel Messi’s return to the Parc des Princes. The Argentina soccer legend returned to PSG after winning the FIFA World Cup 2022 by defeating France. Messi received a guard of honor from the PSG players and coaching staff upon his return. However, not everyone was as happy to welcome him back.

In the picture that was shared on social media, Ethan Mbappe could be seen giving a “death stare” to the seven-time Ballon d’Or winner. Soccer fans on Twitter were quick to notice the young Frenchman’s reaction. One user on the microblogging site tweeted: “Ethan Mbappe’s reaction is quite funny. He’s not here to shake hands with Messi.”

Since then, the close-up of Ethan Mbappe’s reaction to Messi receiving the guard of honor has gone viral on the internet. This has resulted in widespread speculation among fans regarding the status of the Messi-Mbappe relationship at PSG. Fans seem to believe that the 16-year-old’s reaction speaks for his elder brother’s feelings as well.

Since the “death stare” of Ethan Mbappe, which was directed toward Lionel Messi during the latter’s guard of honor has gone viral, fans have been speculating a lot. The subject matter of these speculations is more or less the same. Fans believe that the World Cup finalists might have developed a rivalry.

Kylian mbappe went to New York when he heard Messi was returning 😂😂 pic.twitter.com/Sa0SwXUDTn

This is primarily because Kylian Mbappe, along with teammate Achraf Hakimi, was not present when the PSG squad was honoring Messi. Mbappe and Hakimi were given some time off by Christophe Galtier following their 3-1 defeat to Lens. The duo had since been spending time in the USA. They reportedly caught a basketball game as the Nets defeated the Spurs in the NBA.

Why does this look like some Game Of Thrones plot line 😭 pic.twitter.com/lkZFRM3N9L

Fans, however, have taken Mbappe’s absence to be a sign of controversy. Supporters are of the opinion that a chain of events has led to a dispute between the PSG forwards. There were multiple instances of Messi’s Argentinian teammates mocking Mbappe openly. Fans believe that the 24-year-old’s absence could be a reaction to the disrespect.

Some of the leading fan reactions to the chain of events include comparisons with Game of Thrones plot lines and ridicule directed toward Kylian Mbappe. One fan tweeted: “Ethan Mbappe wants anything but good for Lionel Messi.” Another fan wrote: “Oh it smokes me the dark look of Ethan Mbappe.”  “Messi being glared at by Ethan Mbappe,” was another one of the fan reactions.

Ethan Mbappe is currently 16 years old and a part of PSG’s youth system. He was raised in a family of soccer players. Both his elder brothers, Kylian Mbappe and Jires Kembo-Ekoko, went on to have successful professional soccer careers.

Ethan started off his career by joining the local side, AS Bondy in 2015. Thereafter, as a 12-year-old, he joined PSG in 2018, where he was joined by Kylian who had also joined PSG by that time. Unlike his elder brother who operates primarily as a forward, Ethan is a technically gifted midfielder. Also, while Kylian is a right-footed player, Ethan is a left-footed soccer player.

Now they play for the same team 💙❤️ pic.twitter.com/VhkMQdaArT

2021 was a big year for Ethan Mbappe. The 16-year-old was called up to the French national under-16 side. Furthermore, PSG offered him a three-year contract renewal which he eventually signed. Recently, Ethan made his debut for PSG’s senior team. He featured in a 2-1 victory against Paris FC on December 16, 2022. It’s safe to say that the future looks quite bright for the young Frenchman.