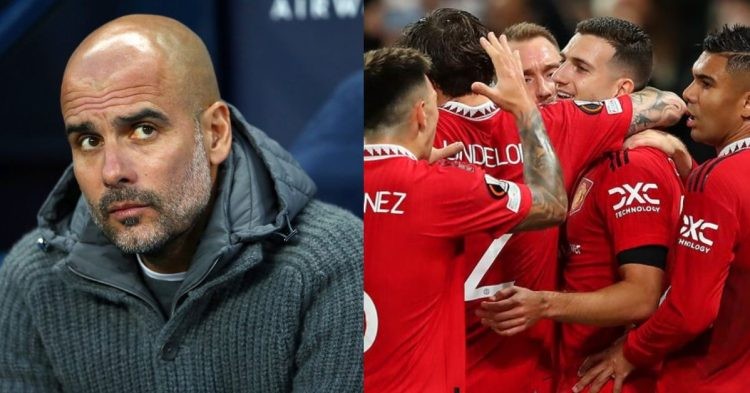 Manchester United has had a rollercoaster of a season so far. They are currently 6th in the English Premier League, just one point behind 4th placed Newcastle, and have a game in hand. Man Utd has been in the spotlight many times in recent months. One of the main reasons being Cristiano Ronaldo.

The Portuguese striker’s antics off the pitch have caused him to be dropped from the squad recently and even isolated from the team. However, Ronaldo made a comeback to the team against Sheriff a couple of days ago in the UEFA Europa League.

He managed to get on the scoresheet late in the game to wrap the game 3-0 for United. The performance has earned some support from an unlikely source in Man City manager Pep Guardiola.

Pep Guardiola thinks @ManUtd are on the way back. “I have a feeling that United is coming. Finally, United is coming. I saw yesterday (against Sheriff) and Chelsea the first half. I thought I like what I see from United just now.”

Is Manchester United getting closer to the glory days?

The Spanish coach’s comments caught plenty of attention online. Many called him out for not sincerely believing that United was on track to being successful once again.

Ffs, he is trying to jinx us

A fan wrote, “Ffs, he is trying to jinx us.” The common opinion among Man Utd fans is that Pep is trying his hand at playing mind games like the great Sir Alex Ferguson once did during his time at United.

Another Twitter user wrote, “He is smart and knows how to speak. Very diplomatic. We are way behind them and he knows that and still answers in this way.” The fan seems to truly believe that United has no other option than to wait for Pep to leave Man City. According to the fan, that is the only way for the 13x Premier League winners to go back to the glory days.

He is smart and knows how to speak. Very diplomatic. We are way behind them and he knows that and still answers in this way. To be honest the only we catch with them is after he leaves. We missed the trick of getting him here after Barcelona .. the owners screwed up…

Many believe that Pep is resorting to mind games to let the world know that United is nowhere near Manchester City. As we all know, City has had all the success in recent seasons compared to its noisy neighbors.

He smashed 6 past them a month ago. But yeah.

In addition to that, another user mentioned that Pep and City just “smashed 6 past them a month ago”. The Citizens hosted the Red Devils at the Etihad a while ago and won the game 6-3. Thanks to sensational hat tricks from both Erling Haaland and Phil Foden, City went past United with ease. Antony and Anthony Martial scored consolation goals for United.

When Guardiola compliments u,u know what u r doing is Right and we have to continue and improve on this more and more.Get Top 4 this season,Win a Trophy (Europa League or FA Cup),I don’t care,get 3-4 players in the summer window to improve the team and squad and we’re cooking.

It has been a while since Old Trafford witnessed some trophies. But some think that the times might be coming soon. One fan mentioned that if the great Pep Guardiola compliments United, it must mean that they are doing something right. Given their improving performances and resilient attitude on the pitch, United is well and truly looking dangerous again.