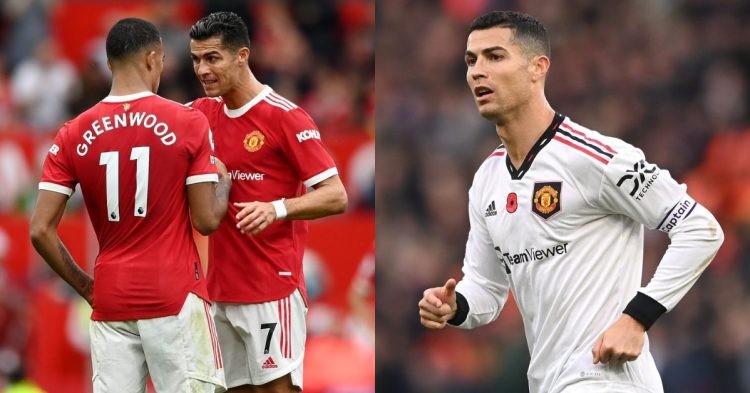 Cristiano Ronaldo is the hottest topic in world soccer right now. We are just a few hours away from the FIFA World Cup 2022 but the entire planet is still talking about the Portuguese star. For the fans that don’t know, Ronaldo did an explosive interview with Piers Morgan, which had a major impact on his club. The interview was vital to his future since it prompted Manchester United to take necessary actions against the player.

Many may wonder what did Ronaldo say to infuriate the club and manager Erik ten Hag. Two of the things he mentioned to Piers Morgan were that he did not respect ten Hag, and the owners, the Glazers, only care about the commercial aspect of owning a club and not the soccer. In addition to that, Ronaldo even called his former teammate Wayne Rooney a “rat” which received a response from the latter as well.

According to various reports, Erik ten Hag does not want Ronaldo at the club anymore. The Glazers and the rest of the Man Utd board are deciding whether to terminate their star player’s contract. If that happens, Ronaldo will be losing a whopping $19 million in wages. Amid all this controversy, fans have pointed out one more factor that is quite interesting.

Many Twitter users have pointed out the fact that Mason Greenwood is still “at the club”. For context, the club suspended the young player after his sexual assault came to light. These allegedly happened during his relationship with Harriet Robson. Moreover, fans were quick to claim that Greenwood will never play for United again, after his arrest.

With that said, fans have asked the question of how Greenwood is still a Man Utd player, which Ronaldo might not be in the near future. One user wrote, “How is Mason Greenwood lasting longer than Cristiano Ronaldo. Wow.”

How is Mason Greenwood lasting longer than Cristiano Ronaldo. Wow.

Cristiano Ronaldo gets immediately terminated but Mason Greenwood is still under contract at Manchester United…. pic.twitter.com/pmY9Sez8f8

Mason Greenwood still has a contract at Manchester United, but saying Cristiano Ronaldo’s contract is being terminated because he spoke the truth.

ISTG I’ve seen more sympathy for Mason Greenwood than for Cristiano Ronaldo on this platform. I’m not accusing Every Manchester United fan btw, But you know who you are. pic.twitter.com/ZjcypdqdeW

It seems like fans are asking the question to Manchester United and its management. Greenwood was a sensational player who many claimed to be a prodigy. Unfortunately, his career took a drastic turn after the club suspended him. Moreover, United fans believe that Alejandro Garnacho might be his regen. His case remains in court as of now as well. As for Ronaldo, some have stood by him and said that he “spoke the truth.”

Mason Greenwood still has a contract at Manchester United, but saying Cristiano Ronaldo’s contract is being terminated because he spoke the truth kinda of sucks!

But that is Manchester United Football Club for you💀 pic.twitter.com/NsiYkemZf7

“Mason Greenwood still has a contract at Manchester United, but saying Cristiano Ronaldo’s contract is being terminated because he spoke the truth kinda of sucks! But that is Manchester United Football Club for you,” a fan tweeted.

There have been no developments made in Cristiano’s situation as of now, mainly because of the World Cup that the world is waiting for. However, Man Utd have said in a statement that they have taken steps to initiate a response to Ronaldo. Only time will tell if the 5x Ballon d’Or winner is let go by the club.