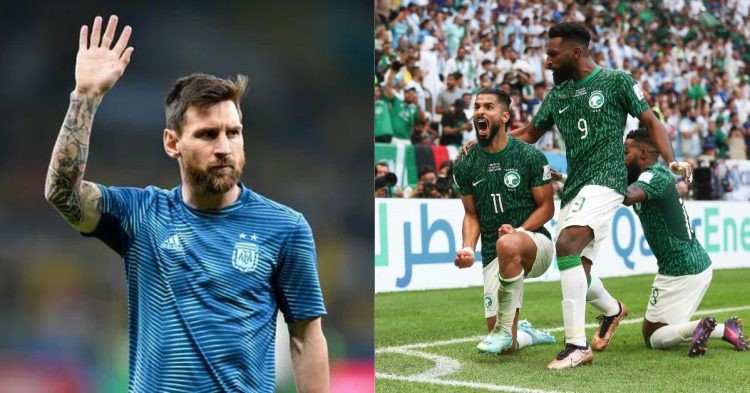 Lionel Messi and Argentina‘s start to the World Cup was far from ideal. They lost 2-1 to Saudi Arabia despite being ahead at halftime. Argentina now has to win their next two matches against Poland and Mexico if they are to avoid depending on other teams for qualification. Their next game will be against Mexico on 26th November.

Messi is one of the biggest names in football. Having a highly successful career at Barcelona and now PSG, he has signed many lucrative deals over the years. In May, it was reported that Messi had signed a highly lucrative deal with Saudi Arabia.

Lionel Messi signed a lucrative deal to promote Saudi Arabia in May of this year. The Argentine is set to earn around $30 million a year from this deal. Besides this, the ex-Barcelona man already earns around $40 million a year from his PSG contract and other endorsements. The deal has been signed to promote tourism in the country that has been in the midst of controversy in the recent past.

Many reports were written after Argentina’s loss to Saudi Arabia, a country Messi now promotes. Messi was reportedly booed off the ground after his side’s loss to the middle-eastern country. Saudi Arabia’s Crown Prince also declared a state holiday following the historic win.

While Messi’s deal on its face is for promoting Saudi Arabia, it has been linked to Saudi’s ‘Vision 2030’. The new 48-team World Cup has led to multiple countries bidding to host the World Cup together. The 2026 World Cup will be hosted by three countries, the USA, Canada, and Mexico. The 2030 World Cup bidding has begun, but the only official bid has come from Spain, Portugal, and Ukraine.

Lionel Messi has a lucrative deal to promote Saudi Arabia.

The Saudis want the 2030 World Cup, as do Messi’s Argentina.

So why has the arguably the best player of all time ended up in this strange position?@AdamCrafton_ investigates a very uncomfortable deal.

Uruguay and Argentina are also expected to present a joint bid for the 2030 World Cup. It will represent 100 years since the first FIFA World Cup was hosted in Uruguay. Hence, Messi’s deal with Saudi has made some uncomfortable, as he is promoting them, and their ‘vision 2030’ to host the World Cup. This has been described as “a unique transformative economic and social reform blueprint that is opening Saudi Arabia up to the world”.

The Qatar World Cup has already had a lot of controversy over the hosting nation, and if Saudi Arabia is to win the bid, the 2030 World Cup will be no different. It seems to be a conflict of interest for Messi, Argentina’s biggest star, to be promoting Saudi Arabia while his own country is set to bid for the World Cup.