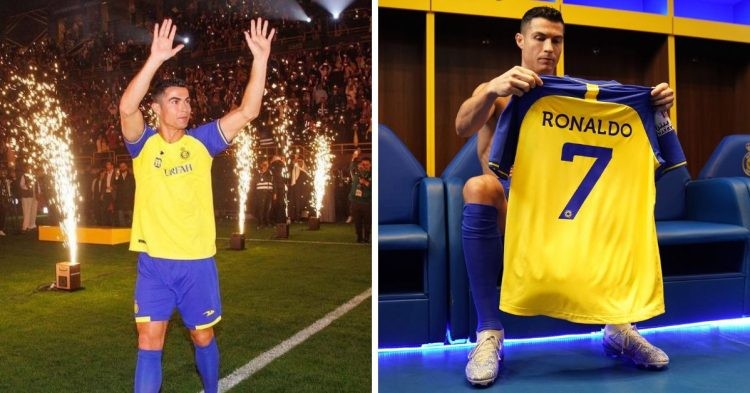 Cristiano Ronaldo has made history after inking a deal with the Saudi Arabian Pro League club Al-Nassr, making him the highest-paid soccer player of all time. According to reports, the new contract will give him an annual paycheck of roughly $200 million.

After leaving Manchester United, the superstar joined Riyadh, the capital of Saudi Arabia, and will be adding a massive amount of money to his already impressive wealth which he has earned from his triumphs both on and off the field. Ronaldo has already earned an astounding $400,000 per week while with Manchester United, but his new contract will see him make a whopping $1 million per week.

ESPN reported that Cristiano Ronaldo made history in 2020 by becoming the first soccer player ever to reach $1 billion in career earnings. The Portuguese decided to return to Manchester United in 2021 but had to leave the club before the FIFA World Cup 2022 following a disagreement with the club’s administration.

To put this into point of view, when he played for Manchester United, his compensation was $24.7 million every year, equating to roughly $473,000 every week. Subsequently, in one day, he earns more than he used to in one week at Old Trafford.

Ronaldo’s ties to Manchester United were cut off following some controversial remarks he made on a television show prior to the start of the 2022 FIFA World Cup. Not only did he talk about issues with United’s coach Erik ten Hag, but he also publicly disparaged the team in an interview with British talk show presenter Piers Morgan, resulting in the termination of his agreement in England.

Net worth of Cristiano Ronaldo

As of January 2023, Cristiano Ronaldo has a net worth estimated to be around $500 Million, putting him amongst the wealthiest sports stars in the world. He is widely considered to be one of the greatest soccer players of all time, and his career has enabled him to break records and gain over $1 billion from salaries and endorsements.

Apart from his soccer career, Ronaldo has earned a considerable amount of money through endorsement deals and sponsorships with different clothing companies. He has lent his name to a variety of products, such as sports apparel, beverages, financial services, and video games.

Ronaldo has a lifetime endorsement deal with Nike which nets him a whopping $1 billion, along with deals with a number of brands like Herbalife Nutrition, Clear shampoo, Armani, Dazn, and many more.