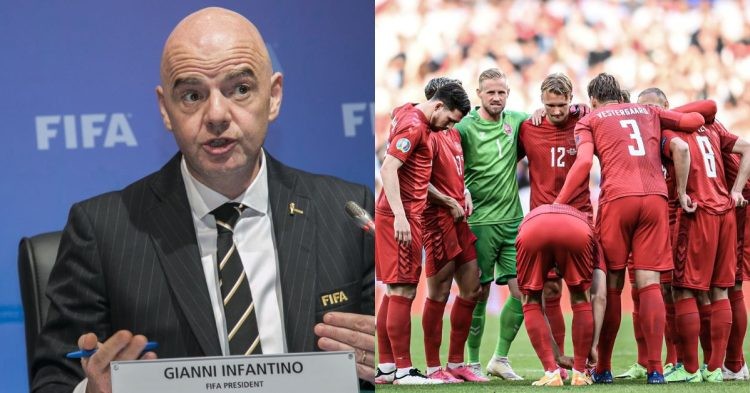 The FIFA World Cup 2022 has got the entire world talking, and with good reason. It is the biggest sports tournament in the world. People mainly love the World Cup for how rare it is, it happens once every four years, and the entire world is lit up during this time. Another place the World Cup is a platform which the whole world will be watching. It seems like Denmark wanted to use this opportunity to spread awareness.

FIFA have rejected Denmark’s request to train at the World Cup in shirts reading “human rights for all”, according to the Danish Football Association. pic.twitter.com/ZD5xQYZSgZ

For those who don’t know, Denmark reached out to FIFA a while ago. The reason was to receive permission to wear a patch on the front of their jerseys. It would have mentioned, “Human Rights for All.” However, their plans have taken quite a drastic turn in the last day or so after FIFA rejected Denmark’s request. Many have called out the federation for the decision.

The DBU Chief, Jakob Jensen said, “We have today got a message from Fifa that the training shirts our players were to train in, where it would say ‘Human rights for all’ at the stomach, have been rejected due to technical reasons, which is regrettable.”

The main reason for FIFA’s decision would be that the message will be too political to display on the biggest stage in the world. A Twitter user tweeted, “FIFA’s human rights policy authorises anyone to protect & promote all internationally-recognised human rights. Human rights are not political. They’re universal. Denmark should go ahead. As should all teams.”

Human rights are not political.

Denmark should go ahead.

As should all teams, including Australia. https://t.co/X3xf9OuDa1

Do it anyway. What are they going to do, stop them from playing?

I’d just go ahead and do it. What’s FIFA going to do? Throw them out of the tournament?

FIFA, which has not trouble sponsoring tournaments in highly repressive countries, refuses to allow players on Denmark’s team to wear shirts that say “Human rights for all.” That’s too political! https://t.co/uhR2lcQZmc

It seems like the soccer world believes that Denmark should go ahead with their idea. However, FIFA might bring up countermeasures if the European country decides to go ahead. As we all know, many rumors of FIFA ignoring the human rights violations have gone viral in recent months.

A Twitter user wrote, “If you’re surprised that FIFA won’t let Denmark wear shirts that say “Human Rights For All”, you haven’t been paying attention.” This indicates that the soccer fans believe it should not be new to us all that the federation has taken such a decision.