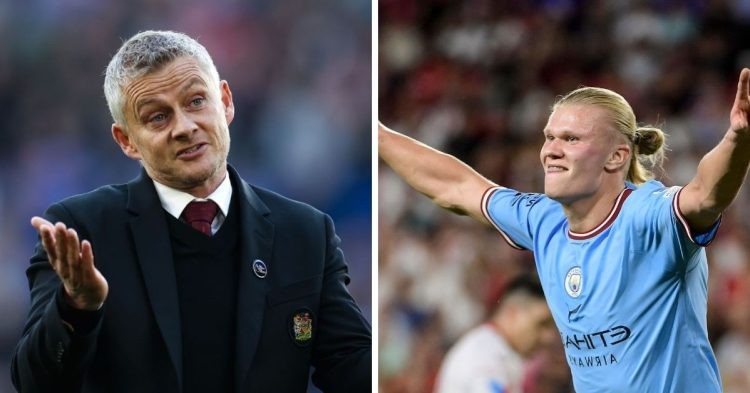 Erling Haaland has discussed the impact that heading drills at Molde have had on the development of his game. Now one of the top strikers in the world, the Manchester City player has credited former Manchester United manager Ole Gunnar Solskjaer for helping him reach his current level.

In an interview with British GQ, Haaland remembered what Solskjaer said on the training field that inspired him to dedicate his time to working hard. Solskjaer was the head coach at Molde when the budding player joined the team in 2017.

He said: “The first thing I think he said to me was ‘You have no idea how to head the ball. We have to work on that. This is what we did for two years, the whole period I was in Molde. And it was a good thing, because I couldn’t hit the ball, and now I’m scoring goals with my head – thanks to them.”

In 2018, Solskjaer departed, and Haaland subsequently rose to stardom before moving to Red Bull Salzburg the following year. In 2022, the striker completed a move to Manchester after a stint at Borussia Dortmund. In his career, he has scored 162 goals, 14 of which were scored with his head.

Since joining City in the summer, Erling Haaland has scored three goals with his head, including one against rivals Manchester United. His impressive goal-scoring record has earned him a reputation as one of the best soccer players in the world.

To date, he has scored 27 goals in just 24 games and is the Premier League’s top scorer this season. As a result, many teams are struggling to fend off interest in the talented 22-year-old. It seems likely that this impressive run of form will continue.

How many headers did Erling Haaland score this season?

Erling Haaland is quickly becoming one of the biggest names in soccer. Since joining Manchester City in the summer, the 22-year-old Norwegian forward has made an immediate impact. He has scored three goals with his head, including one against rivals Manchester United, and is the Premier League’s top scorer this season with 27 goals in just 24 games.

Haaland is a complete forward who can score from all areas of the pitch. He has an impressive combination of dribbling, passing, and shooting ability, and is a threat in the air. He has also shown a great work rate off the ball and is always looking to get involved in the build-up play and create chances.

His impressive goal-scoring record has earned him a reputation as one of the best strikers in the world, and many teams are scrambling to acquire his services. It seems likely that this impressive run of form will continue, as Haaland looks to take his game to the next level.

Haaland is only in the early stages of his career, and it remains to be seen how far he can progress. However, it is clear that he has the potential to become one of the greatest players of all time. He has already made a huge impact in the Premier League and is showing no signs of slowing down. With the right guidance and support, he could become an all-time great.

In the meantime, Manchester City fans can sit back and enjoy watching Erling Haaland continue to score goals and terrorize defenses. The sky is the limit for this young superstar, and it looks like he’s just getting started.