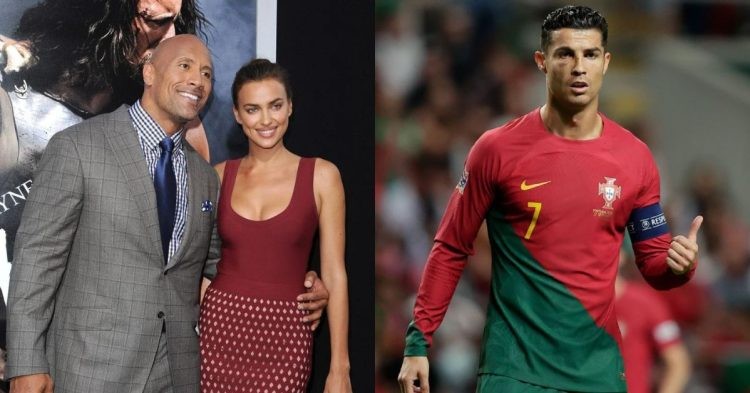 Cristiano Ronaldo is one of the biggest names in sports history. He has played for big clubs like Manchester United, Real Madrid, and Juventus, and has become a legend in each of those clubs. He has won multiple major domestic and international titles with club and country. As a very popular figure, Ronaldo’s dating life was in the media very often. He is currently dating Georgina Rodriguez, with whom he has been for five years.

Before he met Georgina, Ronaldo was in a relationship with Russian model Irina Shayk. The 36-year-old had broken things off with the Portuguese in 2015, after nearly five years together. In an interview, she was asked about Ronaldo’s opinion of her working with Dwayne Johnson in the 2014 movie Hercules.

Speaking in an interview, Shayk discussed her role in the 2014 movie. Shayk was asked, “Does your boyfriend feel a little jealous? Didn’t he say anything to you that you play the wife of Dwayne Johnson?” Shayk replied very swiftly to this question, “I don’t know you should ask him.” The Russian model played the role of Megara, Hercules’ wife in the movie.

Irina Shayk & Dwayne Johnson on the cover of the Hercules movie. pic.twitter.com/cqhYPx1IcT

Continuing her answer, Shayk said, “Well I think, I’m this kind of person, if I take some business decisions for myself, if I want to do something, I don’t ask no one what they think about it. It’s your career, it’s your life. You have to be independent, and take decisions by yourself.” She seemed to be dismissing Ronaldo’s thoughts and opinions on the matter.

Irina Shayk dated Ronaldo for almost five years before they split in 2015. Following their split, there were rumors of the Russian dating her on-screen husband Dwayne Johnson. But these rumors were quickly shut down by friends close to both the film stars. Johnson went on to date and consequently marry Lauren Hashian, while Shayk was reportedly in a relationship with Hollywood superstar Bradley Cooper.

Shayk had earlier opened up about her relationship with Ronaldo. The model revealed that Ronaldo made her feel “ugly and insecure.” She said she ended the relationship after she realized Ronaldo was not the right man for her in 2015.