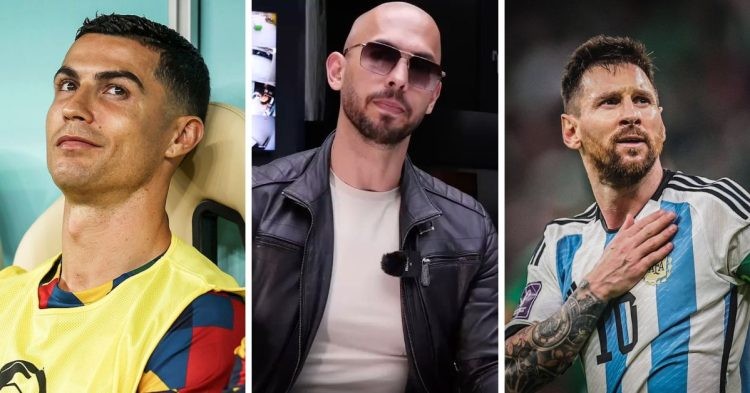 Andrew Tate, a four-time world champion kickboxer, was known as “Top G” in his fighting career. However, this did not lead to financial success. It wasn’t until he moved into the realm of investments that Tate was able to amass wealth and become successful. Reports indicate that he is a multi-millionaire with a net worth of more than $200 million. Nonetheless, ‘Top G’ has incorrectly estimated his wealth to be one billion dollars.

Tate has often been queried concerning Cristiano Ronaldo and Lionel Messi in his interviews. He has continuously expressed a sentiment that makes one ponder if he is familiar with them. When he was asked, “If you have to pick: Ronaldo or Messi?” he said, “I don’t have a clue.”

Tate revealed that he has no interest in soccer and is unfamiliar with Chelsea or Arsenal. He also made clear his animosity towards the English football squad by saying he only watches the World Cup to observe England’s defeat.

As Lionel Messi holds the FIFA World Cup 2022 in Qatar, many in the sporting world are considering him to be greater than Portuguese star Cristiano Ronaldo. Throughout their professional careers, soccer fans have debated comparing the two. The debate about the ‘greatest of all time’ appears to have been settled, with Andrew Tate offering his honest opinion on who should be chosen between the two.

Andrew Tate recently spoke with Piers Morgan in an exclusive interview and covered many topics, including his clinical depression and being suspended from the web. The former kickboxer-turned-businessperson declined to pick between Lionel Messi and Cristiano Ronaldo when asked to do so.

Tate said, “They (Lionel Messi and Cristiano Ronaldo) are two hard-working men on the earth and I respect people who dedicate themselves.” There’s no doubt that Lionel Messi and Cristiano Ronaldo have been two of the most dominant players of their era, reaching incredible levels of success. Despite Ronaldo’s inability to win the World Cup, he still remains a figure of significance in the game.

Lionel Messi and Cristiano Ronaldo are both in the twilight of their football careers, but it is uncertain when they will hang up their boots. Messi has made it known that he intends to remain active in the sport, while Ronaldo has yet to make a definitive statement on his future. Despite the ongoing comparison between the two, Andrew Tate has expressed his admiration for both players.