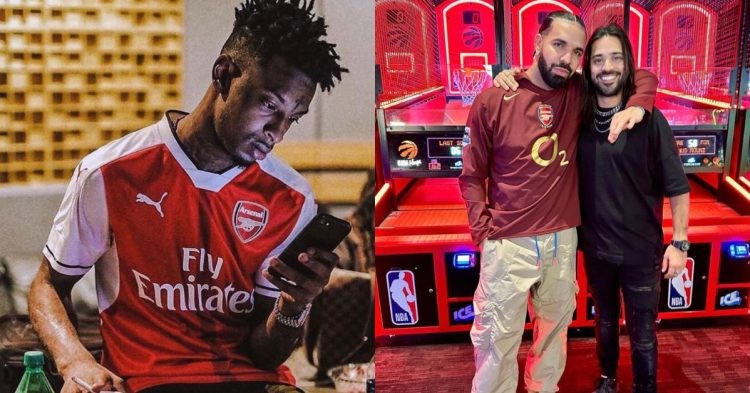 The new album “Her Loss” by Drake and 21 Savage includes a reference to Arsenal of the English Premier League. Circo Loco, the ninth song on Her Loss, contains the Arsenal lyric.

In reference to the London-based team, 21 Savage raps, “Still gotta watch the Gunners win Premier League,” in the second stanza.

21 Savage and Drake shouting out the Arsenal in their new album… 🗣️ pic.twitter.com/wnsnaR8U2J

When he was seven years old, 21 Savage moved from London to Atlanta, but he never acquired American citizenship.

He has previously been photographed wearing an Arsenal shirt, and the lyric shows that both he and Drake support the British team and hope they win the league.

Arsenal this season have been in scintillating form, as they sit atop the Premier League table after twelve games.

Arteta’s men are the serious contenders to fight with Manchester City this year for the Premier League title, with others far away from these two.

How many times did Arsenal win the Premier League?

The Gunners have won 13 English league championships, placing them only behind Manchester United (20) and Liverpool (19) for the most trophies.

Only three of Arsenal’s championships have come during the Premier League era. Certainly, none have been obtained since the club moved to the Emirates.

Arsenal are top of the premier league and Europa league table. What a season Arsenal are having. pic.twitter.com/QEyj8AENok

Only seven teams have never been demoted from the Premier League, including Arsenal. They have been a mainstay in England’s top flight for more than a century.

In the 2003–04 season, Arsenal last won the Premier League. It goes without saying that this season will forever be known as the club’s “Invincibles” year.

The only side to ever win one, Arsenal went undefeated in their 38 league games that season, winning 26 of them. Eventually, they were honored with a gold trophy instead of the normal silverware.

The Emirates team hasn’t won the championship in nineteen seasons, and their closest finish since then was third in 2007–08. They finished four points behind champion Manchester United.

After winning ten of their first twelve games of the season, the Gunners quickly ascended to the top of the league.

With a narrow victory over FC Zurich last night, the Gunners took first place in their group with 15 points and guaranteed their place in the Europa League round of 16.

There were many positives from the game on Thursday night. Certainly, Kieran Tierney asserts his claim for playing time under Arteta. With a stellar 90-minute display finished off by a beautiful goal.

The focus is now swiftly shifting to Sunday lunchtime’s Premier League match between Arsenal and Chelsea at Stamford Bridge.

Chelsea have only won ONE of their last six games vs Arsenal in all competitions 😳😬 pic.twitter.com/jho8WU95Eh

The Gunners will face a tough test in the London derby, especially after their previous performances on the road. Evidently, where they only managed to earn four out of a potential nine points.

After the London derby, Arsenal welcome Brighton home for a clash in the EFL Cup. Consequently, they play their last game away against Wolverhampton Wanderers in the Premier League.

Arsenal would love to lead the Premier League table before the FIFA World Cup 2022 starts in Qatar.