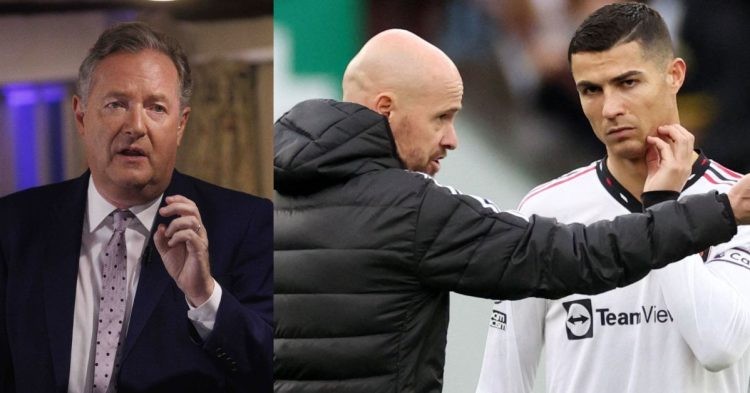 Piers Morgan has called for Erik ten Hag to beg him for forgiveness and apologize to Cristiano Ronaldo if Arsenal wins the league. According to Morgan, Ronaldo would have been key to Manchester United‘s title surge. He believes it is not possible for them to win the league without him.

“When we [Arsenal] win the league and when United do not win the league because they got rid of the GOAT, I expect Erik ten Hag to get on bended knee beg me for forgiveness and apologize to Cristiano Ronaldo for the shocking disrespect that he showed him,” Morgan said.

“I wanted to ask Ten Hag is whether anyone in this United team is going to score as many goals as Ronaldo did last season? I hope Ten Hag gets down on his knees & asks for forgiveness, & that he apologizes for the blatant disrespect he showed for Ronaldo.” pic.twitter.com/ByWn1DX3u5

When asked if United can beat Arsenal without Ronaldo, Morgan said, “Why don’t you come back and ask me at 6.30 pm [GMT] on Sunday and see how cocky they’re all feeling at United then?”

“I’ve been watching it all. They’ve been beating a few teams and they had a good result against City.

“Let’s not get the bunting out just yet. I think we’re going to absolutely demolish them on Sunday. And then at that moment, I will remind them that they managed to lever out the greatest footballer in history because they thought that was a great idea.

“The other question I would ask is will any of this brilliant new United team score as many goals for United this season as Ronaldo did for them last season?”

Manchester United Vs Arsenal next weekend is surely the biggest match between them since the glory years of the rivalry 20 years ago.

United has been in tremendous form recently. Morgan, however, shot down all suggestions that United can leapfrog Mikel Arteta’s high-flying Arsenal. The Red Devils are set to face the Gunners on Sunday, January 22. A win for United could cut the gap down to six points.

Statistics are a big enemy for Morgan’s claims of United being worse off without Ronaldo. Stats show that United has, instead, been much better off without the five-time Ballon d’Or winner.

Man United’s win percentage with and without Cristiano Ronaldo this season 👀 pic.twitter.com/fllrBMGRgt

In another telling statistic, according to Planet Football, United covers more distance when without Ronaldo. An average of 103 kilometers is covered when he starts. And an average of 107.5 kilometers, when he doesn’t.

Since his contract termination, United has come back after the FIFA World Cup 2022 break all guns blazing. They have won all seven of their matches since the break including a fantastic comeback victory against Manchester City. The Red Devils are fourth in the table. They are on equal points (38) with Newcastle United, who have played an extra game.