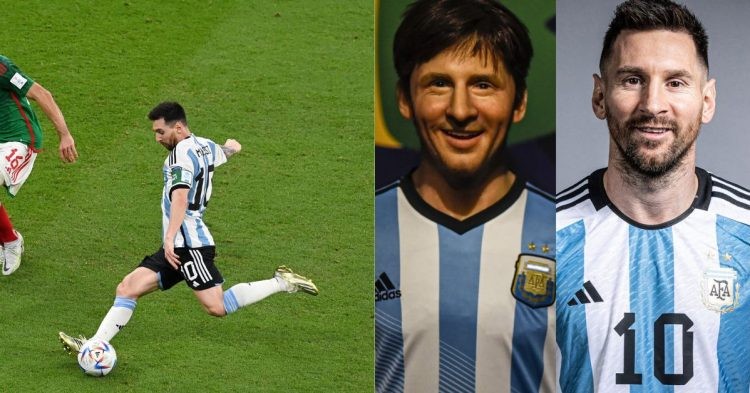 Lionel Messi is one of the greatest soccer players of all time. Sculptures of soccer players are often seen in various places. Players like David Beckham, Cristiano Ronaldo, Diego Maradona, and Neymar have also had their statues made. Numerous statues of Lionel Messi have been made in different locations. There is one in the Barcelona museum, one in Buenos Aires, and even one in Kerela, India. Most recently, a new wax statue of Messi has been made in Brazil.

Lionel Messi’s recent wax statue in Brazil has been grabbing the headlines for all the wrong reasons. Although wax statues cannot be made like exact replicas, Messi’s new statue looks like almost anything other than Lionel Messi.

The image of the statue has gone viral, while memes and hilarious reactions from the Netizens are flooding the Internet. Fans of the Paris Saint-Germain star have not taken this incident kindly. They feel that the statue disrespects Messi.

Here’s a look at the various reactions of the fans regarding Lionel Messi’s new wax statue.

I know they did this on purpose https://t.co/yTNvKIwxgv

Lmao they can’t be serious https://t.co/OlZadB6aMS

This is not the first time that there has been controversy regarding a Lionel Messi statue. The incident took place in 2017, when a Lionel Messi statue in Buenos Aires was vandalized which caused a huge hue and cry. Messi’s statue was installed shortly after Argentina’s loss to Chile in the 2017 Copa America final.

Messi also announced his retirement after the final, although he did come back to the national team a few months after. However, the Buenos Aires government later promised to restore the statue.

Messi’s recent wax statue is situated in Brazil, the arch-rivals of Argentina. The statue is installed in a museum in a city named Foz do Iguacu.

It will be interesting to see whether Neymar’s Brazil gets their revenge over Argentina, or whether Messi finally get his hands on the World Cup trophy.