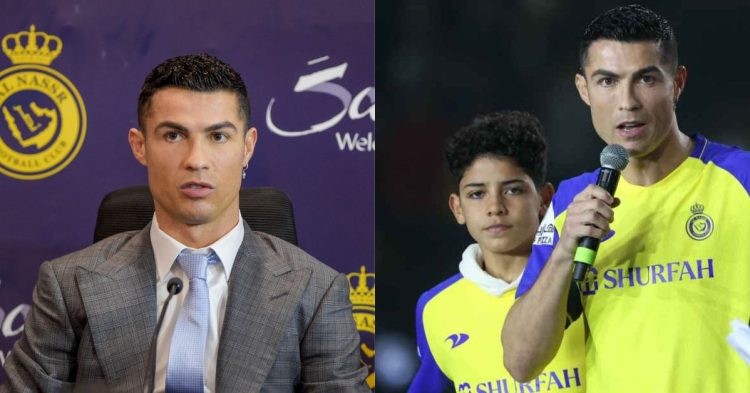 Ronaldo gives a reply to his critics. (Credits: Twitter)

Cristiano Ronaldo has responded to those who have been critical of his move to Al-Nassr in Saudi Arabia, after signing a lucrative contract that makes him the highest-paid player in the history of the sport.

He made it clear that he is unimpressed with the doubts surrounding his decision to leave Manchester United and join the club in the Middle East. The Portuguese superstar sent a strong message to his detractors, showing that he is not afraid to stand up for himself.

In the press conference, Ronaldo responded to the critics and said “Many people speak and give their opinions but they really do not know anything about football. As you know football now, probably the last 10-15 years it is different, all the teams are more prepared, more ready, So for me, it’s not the end of my career to come to [Saudi Arabia], that’s what I want to change. So I really don’t worry about what the people say.”

At his presentation, Cristiano Ronaldo declared that he had gotten a lot of other propositions from teams everywhere before concluding that Al-Nassr was the most suitable spot for him to progress his career. And he expressed his desire to take part in Al-Nassr’s upcoming game. The squad is set to compete in the Saudi Pro League on Thursday against Al-Tai.

Cristiano Ronaldo’s recent signing with Al-Nassr has left his fans in shock and dismay. The Portuguese football star has been a fan favorite since his time at Manchester United, and his transfer to Real Madrid and Juventus and then again to Manchester United only added to his immense popularity. Now, his decision to sign with Al-Nassr has come as a major surprise to many of his devoted fans. The transfer has been met with a lot of criticism from Ronaldo’s supporters.

Al-Nassr is a club from Saudi, and Ronaldo’s move has been seen as a money grab. Since Saudi is a wealthy nation, it is believed that Ronaldo is only joining Al-Nassr for the money, rather than for footballing reasons. In addition, the transfer has been seen as a betrayal by many of Ronaldo’s fans. They feel that their favorite player has abandoned them in favor of a club from a foreign country.

So in the end it was all about the money 💰

Why not just retire man…

People will quickly move on and forget about Ronaldo when he goes to Saudi, no one is following his career over there.

Well deserved. This is his level now.

Kids trolling a man who’s made…for making money. It’s crazy. A man kept himself fit at an age where most of his peers have retired and will sign for millions of pounds or euros or dollars but you’re trolling him. Can’t make this up.

This feeling has been further exacerbated by the fact that Ronaldo left Manchester United without any sort of farewell to his fans. Some of Ronaldo’s supporters, however, have supported the move. They argue that it is Ronaldo’s right to choose the club he wants to play.