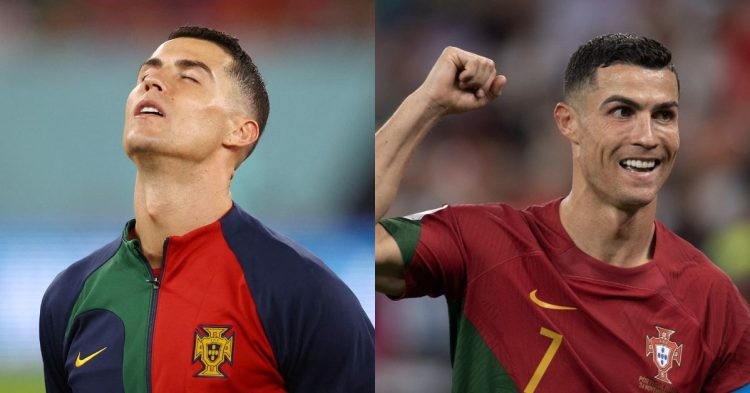 Cristiano Ronaldo and Portugal will face Morocco in their quarter-final match in the World Cup. While they are favorites to overcome the African side, Morocco’s defense has been almost impenetrable in the World Cup so far. But Portugal’s attack is filled with huge quality which will make this match a must-watch. Amidst the build-up to this game, Ronaldo spoke about his lack of goals in this World Cup.

MOROCCO VS. PORTUGAL IN THE QUARTERFINALS 👀🍿 pic.twitter.com/72W6m6gpsY

Ronaldo has scored just one goal, a penalty in this World Cup. It came during Portugal’s 3-2 win against Ghana. Ronaldo is playing his fifth World Cup, and this could well be his last. The Portuguese legend will be desperate to get his hands on the trophy that has eluded him for so long.

Cristiano Ronaldo is okay with not scoring in the World Cup

Ronaldo spoke about his amazing goal-scoring record in international games. He said he was not worried about his goal-scoring record, and just wanted to win the prestigious trophy. “If we win the tournament and I don’t score a goal, I’ll take that, I swear on my children’s lives. The most important thing for me is what will be written in history,” he said.

Cristiano Ronaldo: “If we win the tournament and I don’t score a goal, I’ll take that, I swear on my children’s lives. The most important thing for me, is what will be written in history.” 🐐 pic.twitter.com/7xkbsp6mW2

Ronaldo spoke about winning the World Cup in his interview with Piers Morgan. Ronaldo said that if he did indeed score the winning goal in the tournament, he would retire immediately as he would have achieved what he has always wanted to achieve. But Ronaldo’s form has not been great in this World Cup and his selection for future games has become doubtful.

How many goals did Ronaldo score in his career in the World Cup?

Ronaldo is currently playing his fifth World Cup. His longevity at the top level has not been replicated by any player so far. At the World Cup has scored eight goals since his debut in 2006. In each World Cup, Ronaldo has managed to score one goal, except in 2018. The Russia World Cup was Ronaldo’s best performance on the big stage when he managed to score four.

🍷The 3 oldest players to score a goal in the 92 year history of the FIFA World Cup.

Ronaldo’s famous hattrick against Spain showed the quality and belief he had leading into the knockout stages of that tournament in 2018. Unfortunately, Portugal were knocked out in the round of 16 by Uruguay. Ronaldo has scored just one goal, a penalty in this World Cup. He also claimed a goal against Uruguay which was later awarded to Bruno Fernandes.

They have performed very well in the 2022 World Cup, scoring a staggering six goals against Switzerland in the round of 16. The favorites for this World Cup are France and Brazil. But England, Argentina, and especially Portugal after their performance against Switzerland are a big threat to challenge for the trophy.