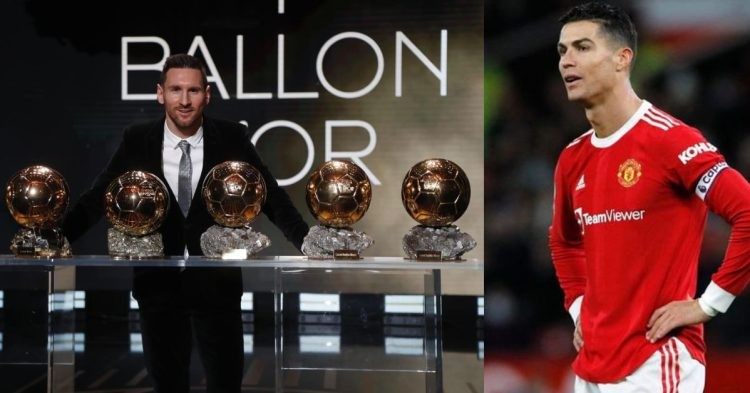 Piers Morgan’s interview is something that later brings trouble into Ronaldo’s life both on and off the pitch. The latest interview resulted in Cristiano Ronaldo terminating his contract with Manchester United.

Before the bombshell interview, Ronaldo also previously had an interview with Piers Morgan where he was asked about a record that Ronaldo wants to have in his book by the reporter.

Ronaldo replied by saying that he wants to have the most Golden Balls in the history of the game. The Golden Ball here refers to the Ballon d’Or.

Ronaldo himself has won the Golden Ball 5 times and is only behind his long-time fellow rival Lionel Messi who won it a record 7 times.

After winning the World cup, Messi is again in contention to win the Ballon d’Or and if he wins it, he will be a holder of the Golden Ball for the 8th time in his career.

In that Pier’s Morgan Interview Ronaldo confessed that he would like to win the most number of golden balls and said “I think I deserve it”.

Ronaldo’s wish is not fulfilled to date as Messi is two Golden Balls ahead of him and it’s unlikely for Cristiano to overtake Messi as CR7 is quite past his prime.

Even more, Ronaldo’s transfer to Al-Nassr takes him out of the picture of the European Competition which is one of the major key points to determining a Ballon d’Or winner.

It is to be said, in terms of the Ballon d’Or race, even Ronaldo would admit that Messi got the better of him and also that CR7 might need to return to Europe to win the Golden Ball again.

How many Golden Ball Awards has Lionel Messi won?

Lionel Messi is the player who has the most Golden Balls in soccer history. A record-breaking seven-time holder of the Ballon d’Or, Messi has always been in the hunt for the Golden Ball.

Messi first won the Golden Ball in 2009 after winning his first UCL against Ronaldo’s Manchester United. Messi went on to win the next three Golden Balls, having a streak of four consecutive wins of the award, which were in 2010, 2011, and 2012, respectively.

In 2019, Messi won his first golden ball since 2015 and finally won his 7th in 2021. Messi has again become the contender for the Golden Ball after winning the 2022 FIFA World cup.