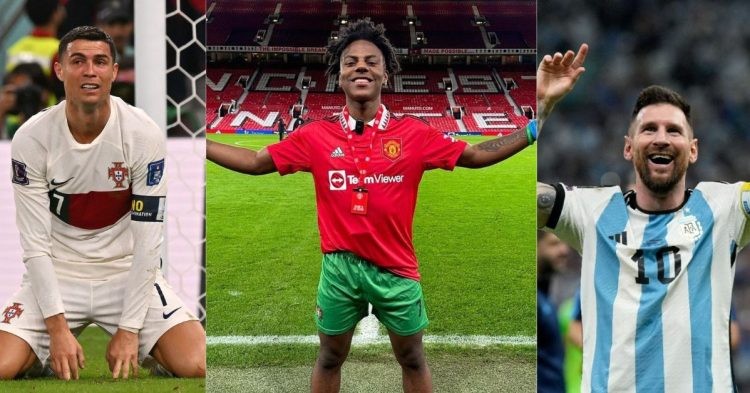 Popular Youtuber ‘IShowSpeed‘, who is a huge Cristiano Ronaldo fan, has claimed he might switch loyalty to Lionel Messi. In one of his latest streams, he talked about how he might go to watch the next Ronaldo vs Messi match. He said, “if Ronaldo will lose this game against Messi, this is over y’all. I’ll become a Messi fan.”

The real name of the 17-year-old Youtuber, who belongs to the US, is Darren Watkins Jr. He gained popularity for being a big Ronaldo fan. To show his love for Ronaldo, he usually makes songs, parodies, and memes among other things. His moment of fame came during a stream when one of the viewers asked Speed about his favorite soccer club. The Youtuber replied by saying “Crister Ronaldo seweyy”.

After he trended on social media for his antics, he has lived a dream life. Speed traveled to Manchester, to watch Manchester United and Ronaldo play. The Portuguese, however, did not feature in that game. His second chance came when he went to Qatar to watch Ronaldo and Portugal perform at the 2022 FIFA World Cup. He turned up for the Round of 16 match and finally watched Ronaldo play when he came on as a substitute.

Speed has claimed that he will have the opportunity to watch Ronaldo play again when Ronaldo goes up against Messi in a match this month.

Speed has claimed that “one of his boys” in the soccer industry has told him a secret that Ronaldo will face Messi in “late January.” The match, however, is no secret. It has been made public that PSG will face an all-star team including players from Al-Hilal and Al-Nassr.

Speed has given Ronaldo one last opportunity to keep his loyalty. He has said that if Ronaldo loses, his loyalty will switch.  He even emphasized his statements by saying, “I’m serious bro. I’m not even trolling bro.”

The match is scheduled to be played on January 19, 2023. The game could be the first time these two greats of the game lock horns since December 2020.

Ronaldo, who is yet to make his first appearance in Saudi Arabia, would be raring to go against long-term rival Messi. While it will not be a surprise that Ronaldo is heading any kind of all-star team, Al-Nassr might not want to risk it. He is set to represent Al-Nassr three days later in a league match after fulfilling his two-game ban.

The two greats have endured contrasting seasons. Messi ended 2022 by lifting the FIFA World Cup trophy and Ronaldo’s ended in heartbreak with a loss to Morocco. The Portuguese also saw his contract terminated at Manchester United in November 2022. It will, however, be a great showdown if both are available and ready to play.