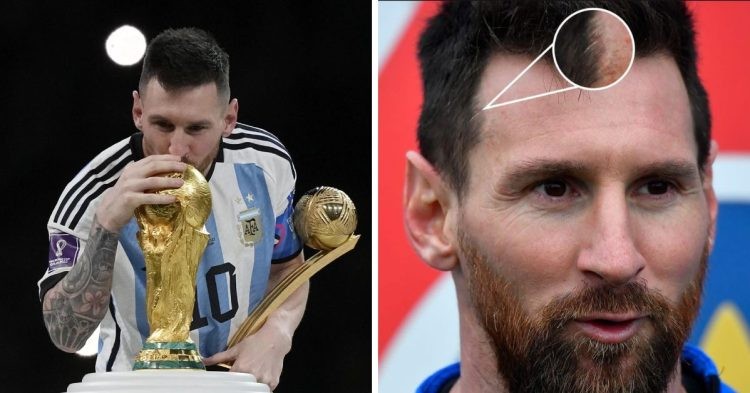 Lionel Messi, one of the world’s most beloved soccer players, recently a photo of Lionel Messi has surfaced on the internet. In the photo, Messi can be seen with a few grey hairs, causing fans to become concerned about their idol’s aging process.

The photograph of Messi’s grey hairs has sparked a wave of conversation surrounding the Argentine megastar, who has been one of the most successful and prolific soccer players of the modern era. Messi, who is 35 years old, has been a dominant force in the game for nearly two decades, but fans are worried that his age may be catching up with him.

Messi’s grey hairs are a stark reminder of his mortality, and fans are understandably concerned about the future of their beloved player. The seven-time Ballon d’Or winner had been a mainstay in the Barcelona lineup since he was 16, and his age has been a major factor in his success. Messi has been able to stay healthy and injury free for most of his career, but that may not be the case for much longer.

The photograph of Messi’s grey hairs has caused some to speculate that his time in the spotlight may be coming to an end. However, Messi is still one of the best players in the world, and there is no denying that he is still a force to be reckoned with.

Although Messi’s age may be a cause for concern for some of his fans, it is important to remember that he is still one of the best players in the world and that he has plenty of years left to make his mark on the game. A fan commented on the post “And old, gray and everything was consecrated the best in the world the best in the World Cup and the smartest to play ….. gray hair do not kill the soul gray hair and age are learning, maturity and knowing what you want in life and did what you wanted.”

Another one said “I’m not ready yet for Messi to have a cane,” and another user commented, “Gray hair isn’t synonymous with old age—it could be stress, anxiety, poor eating, poorly sleeping, or just genetics.”

So, while the sight of Messi’s grey hairs may be a reminder of his mortality, it should not be taken as a sign of his impending retirement.

At 35 years old, Messi is still in the prime of his career, and there is no reason to believe that he will not continue to be a top performer. He is still capable of producing match-winning performances and continues to be one of the most influential players in the game for PSG.