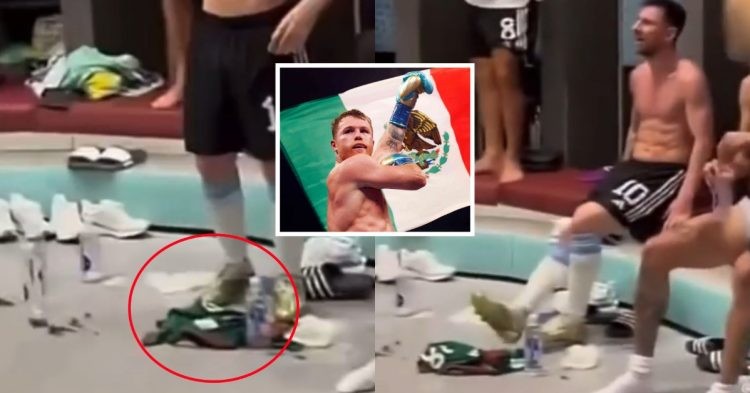 Lionel Messi had a spectacular performance against Mexico during the group stage match of FIFA World Cup 2022. Although Argentina won the match 2-0, it was a hard-fought win and the Argentines needed some Messi magic to get them over the line. However, his actions after the game have infuriated millions of Mexicans including Canelo Alvarez.

Usually, soccer players swap jerseys after the game as a sign of respect. So was the case with this particular match. However, after swapping the jersey, Lionel Messi did not give it the respect that the national jersey deserved. In a viral video, Messi was seen kicking a Mexican national team jersey on the floor. The incident seemingly took place in the dressing room afterward.

Argentina lost their opening match of the tournament to Saudi Arabia, 1-2. Hence, the team was feeling the pressure, as another loss would have ensured their exit from the tournament. So, the mood in the dressing room was one of joy after the win. Players were celebrating the big against Mexico in the dressing room. Seemingly, that is when the controversial moment took place.

Canelo Alvarez is really invested in the ongoing World Cup. Alvarez is a world-champion Mexican boxer, who was rooting for his country from the bottom of his heart. Alvarez even made a huge claim ahead of the competition. Canelo told the world that team Mexico had the potential to even reach the finals of the tournament. Hence the loss to Argentina affected him badly.

He had a furious reaction to the loss at first, but he later sent out a congratulatory to Argentina. But his feelings towards Messi changed after the video emerged of the soccer superstar kicking Mexico’s national jersey.

Canelo is a patriot and always does his best to honor his home country. From wrapping himself with the national flag to fighting on Cinco de Mayo weekend, Alvarez’s love for Mexico is very evident.

“They saw Messi cleaning the floor with our shirt and flag ????”

Hence, the incident has enraged the first-ever unified super middleweight champ. Taking to Twitter, he expressed his disgust about the whole situation.

“Just as I respect Argentina, you have to respect Mexico!! I’m not talking about the country (Argentina) I’m talking about Messi because of the b*****b he gave.”

Canelo clarified that he respects Argentina as a country. So it was shocking to see a well-respected soccer legend showing such disrespect towards another nationality.

“Anyone who doesn’t defend their homeland is an a**hole… fanaticism is one thing, your identity is another. LONG LIVE MEXICO CABRONES.”

He also added that it is one’s duty to defend their country. It explains why Canelo went on such a passionate rant on the topic.

Although the video is going viral, there is yet to be an official statement from team Argentina or Lionel Messi.

What are your thoughts on Lionel Messi seemingly kicking a Mexican national team jersey? Let us know in the comments down below.