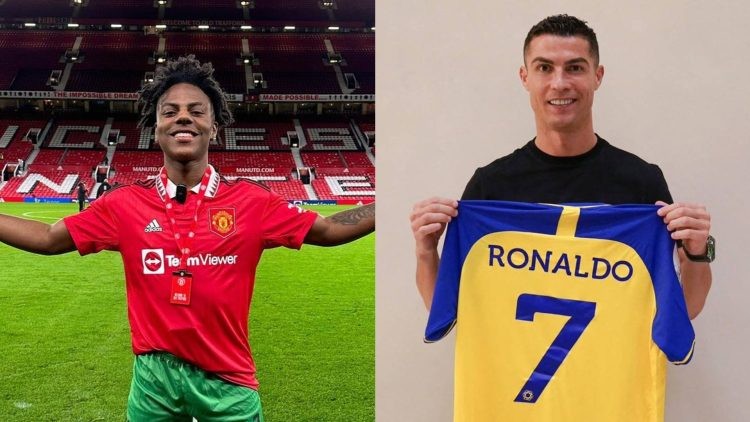 Trending Youtuber and a big fan of Cristiano Ronaldo or as he says ‘Crister Ronaldo’, ‘IShowSpeed’ has posted a video of him where he announced that Al-Nassr had signed him as well and he is going to play alongside Ronaldo.  Although in reality, Al-Nassr’s official Instagram handle has replied to Speed’s DM by replying that he can watch Ronaldo play in Saudi Arabia.

The 17-year-old, Youtuber from the US is popular for being a big CR7 fan and usually makes songs, parodies, memes, and public stunts which tend to highlight his love for Ronaldo. IShowSpeed, whose original name is Darren Watkin Jr, became viral after one of his Fortnite streams went viral. During his stream, one of the viewers asked Speed about his favorite soccer club and Speed replied by saying “Crister Ronaldo seweyy”.

IShowSpeed is popular for his video game and live streams where his reaction to subjects is what makes him unique. After being trending, Speed has traveled to Manchester, to attend a Man Utd game to see Ronaldo as well as to Qatar to see Ronaldo perform at the World Cup.

In his latest YouTube Video, IShowSpeed was streaming chats with his viewers of the chats he had with the official Instagram handle of Al-Nassr FC. The stream started with Speed showing Al-Nassr’s official post of Ronaldo’s announcement ceremony date on Instagram and soon after Speed went to his inbox where he found that Al-Nassr actually replied to one of his DMs.

Speed screamed in the excitement in his iconic way after seeing Al-Nassr’s DM. Speed misinterpreted the response of Al-Nassr and assumed that they have offered him to join the team of Al-Nassr alongside Ronaldo. The 17-year-old screamed, “I’m getting signed!!!” He then spends the next few minutes thinking about what to reply to the response of Al Nassr and even asks his fans for suggestions. In between, he attempts to reply in Arabic.

Whether or not Speed figured it or not but Al-Nassr didn’t offer Speed a professional contract via Instagram. The Saudi Arabian giants suggested through their Instagram text that he can come and watch Ronaldo play at the Mrsool Park.