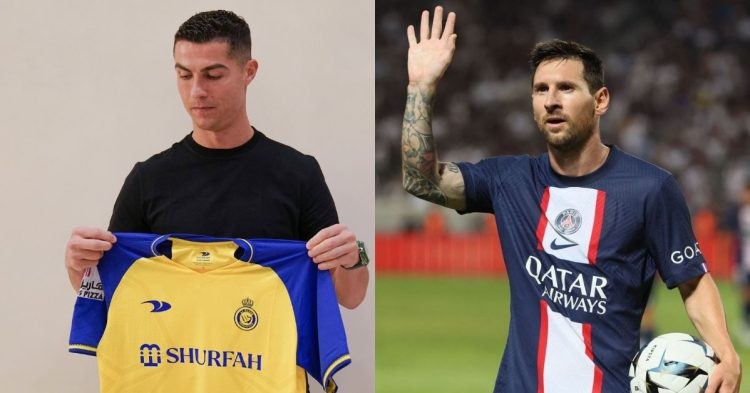 Cristiano Ronaldo is now an Al-Nassr player. Although it sounds extremely unusual to hear that, that is the truth that the soccer world has to accept. It has truly been a great ride as we saw Ronaldo develop into the legend he has become today. It is no secret that we all wanted to witness a great end to his career, especially one better than what he opted for in the end.

His controversial exit from Manchester United, the heartbreaking loss to Morocco in the FIFA World Cup 2022, and the death of his child during the 2021-22 season, Ronaldo faced it all. It looks like he might be going to Saudi Arabia to settle down and slowly end his legendary career. But we can expect the 5x Ballon d’Or winner to carry the same elite mindset he has been playing with.

According to various sources, Ronaldo‘s deal with Al-Nassr is expected to be a whopping $214 million per year. And it looks like he might make even more than including add-ons from commercial deals. His move has come under heavy scrutiny from soccer fans, as many believe he has now retired after leaving Europe.

As reports recently mentioned, Ronaldo will play his first game for the Saudi Arabian giants on January 5, 2023. However, another game that is reportedly on the cards is when a combined team of Al Hilal and Al-Nassr face the French super team Lionel Messi‘s PSG in a friendly later this month.

That only means one thing: we could see our favorite GOATs face off against each other one last time. It surely would be the last dance that fans would be waiting for. Although there have been countless reports of this game, there has been no official confirmation from either team about the game possibly taking place.

Moroccan journalist Achraf Ben Ayad has been mentioned numerous times to convey the news. However, no official report of his has been mentioned. This only brings one question to our minds: is the game really happening?

🚨 On January 19, PSG play a friendly against a combined XI from Al Nassr and Al Hilal.

We could see another clash between Leo Messi and Cristiano Ronaldo.

According to Arab News, the game was indeed a real idea. PSG was set to face the Al Hilal and Al-Nassr all-star team last January 2022 in the Riyadh Season Cup. But the complications that came with the COVID-19 pandemic stood in the way. It looks like this year, there are no disruptions to be expected.

An interesting fact is that this game was originally supposed to take place in September 2021, according to the General Entertainment Authority. But it was rescheduled to January 2022 for the same reason. Ultimately, the concerned parties did not arrive on a fixed date after that.

With that said, it looks like Ronaldo might play against PSG after all. Al-Nassr manager Rudi Garcia confirmed it recently when he claimed that Ronaldo will make his debut in Saudi in a mixed jersey of Al-Hilal and Al-Nassr teams. As confirmed by all the concerned parties, the game will take place at the King Fahad Stadium in Riyadh on January 19, 2023.