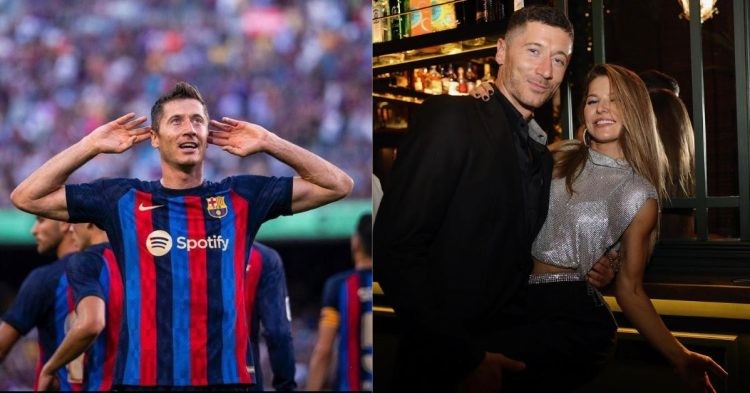 Soccer fans know Polish forward Robert Lewandowski for his movements inside the box and killer instincts in front of the goal. However, it looks like the Barcelona number 9 has his killer movements on a dance floor as well.

Robert Lewandowski is considered one of the best strikers of all time. The 34-year-old scored at an incredible rate at his former club Bayern Munich, before joining Barcelona in the summer of 2022. In this ongoing season of La Liga, he is sitting at the top of the goalscoring charts with 13 goals. He went to Qatar World Cup with Poland and scored twice in their Round of 16 journey.

Robert Lewandowski is on the verge to get a three-match ban for a red card incident against Osasuna prior to the World Cup. Lewandowski, however, is making headlines for a completely different reason. Earlier this week Goalglobal posted a video of the Barcelona man dancing. He was setting the dance floor on fire with his wife Anna Lewandowska and the comment section had a lot of humorous and funny comments.

The best reactions were related to the fans connecting Lewandowski’s dance moves to Spiderman. The top comment was, “Is this a Spiderman 3 deleted scene?” which got almost 1800 likes. Another fan commented, “Tobey: finally, a worthy opponent!” comparing his moves to Tobey Maguire, the first-ever actor to play Spiderman. Another comment, “Bully Maguire Got Some Competition”, again drew a funny comparison to Tobey.

This was not the first time we have seen Robert Lewandowski dancing. He has a TikTok account where he uploads his dance moves. Robert has his wife’s encouragement behind showing his moves and he has said, “I like dancing” in an interview.

Who is Robert Lewandowski’s wife?

Robert Lewandowski got married to Anna Lewandowska in 2013. But she has her own ventures and she has a very successful career for herself. The 29-year-old is a dietician and maker of fitness-related foods. She also has a degree in Physical Education from the University of Poland.

Anna’s achievements don’t stop there. She is a gold medalist in Karate. She has made her name in Karate starting from Europe to National Championships and has won a black belt. Anna has her own brand, ‘Foods by Ann’, which sells all kinds of fitness foods since 2016. Besides all these, she is also the President of the Special Olympics for her country. Robert and Anna can easily be considered a power couple, both excelling in their own fields.