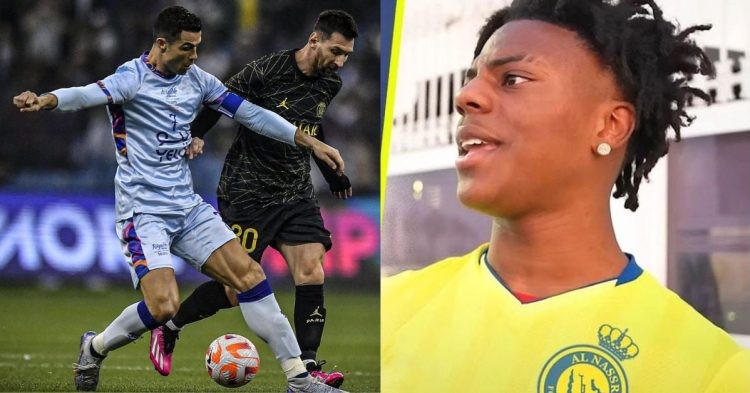 The much-anticipated match between Lionel Messi and Cristiano Ronaldo finally took place yesterday in Saudi Arabia. Although fans expected this to be a one-sided contest, it delivered beyond expectations. Expectedly so, IShowSpeed was present in Riyadh to cheer for his idol once again.

Cristiano Ronaldo finally played his first match in Saudi Arabia and it was full of action. The atmosphere was set for a possible final face-off between Cristiano Ronaldo and Lionel Messi. Ronaldo’s decision to leave Europe after a controversial turmoil with his former club Manchester United was heavily criticized. He suffered a two-match FA ban before he was eligible to play against PSG.

The last dance was special 🐐 pic.twitter.com/23OGpULTAm

There was a doubt if Ronaldo will play for the Al-Nassr and Al-Hilal all-star teams. But when the teamsheet was announced, fans rejoiced. Lionel Messi, Neymar Jr. and Kylian Mbappe, all started for PSG. Whereas, Ronaldo was the only star name for the Saudi combined side. The match started with Lionel Messi scoring in the early minutes. After that, it was the Cristiano Ronaldo show in the first half, as he equalized twice canceling PSG’s both goals.

The super friendly ended in a 5-4 win in PSG’s favor, where Kylian Mbappe ran the show in the second half with elegance. Ronaldo and Messi were both taken off at the hour mark and they got a standing ovation from the crowd in what could be their one last face-off.

IShowSpeed is still a Cristiano Ronaldo fan despite previous comments

Darren Watkins Jr. aka IShowSpeed is the self-claimed biggest Ronaldo fan. And he got his internet breakthrough thanks to Ronaldo. Recently, however, in the World Cup, he again went viral for his antics.

He was present at the World Cup final between France and Argentina wearing a Portugal shirt. However, when Mbappe scored twice he removed his Portugal shirt to reveal a France shirt. Things went wild when Argentina won the final he revealed an Argentina shirt under the French one. Fans thought that Speed is changing sides and marked him as a glory hunter.

Speed didn’t help himself after announcing that he will become a Messi fan if Messi wins the match against Ronaldo. PSG won the match but in terms of goals, it was Ronaldo who scored twice and Messi scored only once. Speed was present at the match and gave his verdict about the greats of the game.

After the match Speed said in a video, “The GOAT debate is over. Ronaldo scored two goals Messi scored one. It’s over with. The debate is over,” talking about the everlasting debate between Messi and Ronaldo. He added to it by saying, “Ronaldo is the GOAT. Stop crying, I don’t wanna hear anymore. Ronaldo is the true GOAT. Wallahi I’m out,” in his usual tone. It seems like he will stick with Cristiano Ronaldo after all.