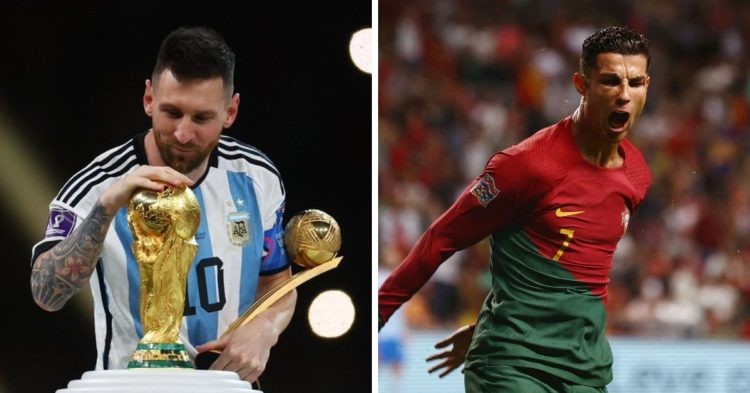 Youtube sensation IShow Speed recently made a controversial statement regarding Lionel Messi and Cristiano Ronaldo’s World Cup achievements. During a podcast session, Speed suggested that Messi’s performance in the World Cup “doesn’t mean anything” when compared to Ronaldo’s statistics.

Speed argued that statistics are the only way to determine who is the best player between the two. He claimed that in the World Cup, Messi was “carried”, and that the tournament’s results should not be taken into account when comparing the two.

Messi and Ronaldo are often touted as the two best soccer players in the world. Both have achieved great success in their respective career, and are widely considered to be two of the greatest soccer players of all time.

However, Speed’s comments have ignited a debate about how to determine who is the better player. Many people have argued that statistics do not give an accurate picture of a player’s performance, as there are many other aspects to consider.

Messi is renowned for his dribbling ability, while Ronaldo is a prolific goalscorer. Each player has different strengths and weaknesses, and a comparison between them should take into account all of these factors. Ultimately, it is up to each individual to decide who they consider being the better player.

Youtuber IShowSpeed has recently come under fire for his comments in which he downplayed Lionel Messi’s World Cup victory. The Youtuber has been an outspoken supporter of Cristiano Ronaldo, and he has used this as an opportunity to make his opinion known that Ronaldo is the greatest of all time.

In a recent podcast, IShowSpeed took the time to compare Messi and Ronaldo, stating that Messi won the World Cup Means nothing as stats say Ronaldo is a better player. He went on to say that the World Cup is only considered the greatest tournament in soccer because it’s the only one that happens every four years. IShowSpeed also argued that Ronaldo has played in more important games and has had a greater impact on his team’s success than Messi has.

This has been met with a lot of backlash from other soccer fans, as Messi’s World Cup victory was seen as a great achievement for both him and his team. Messi had a huge impact in that tournament and his performance was instrumental in Argentina’s success.

Overall, it’s clear that IShowSpeed’s comments have been met with a lot of criticism and that it’s unfair to discount Messi’s World Cup win when judging who is the greatest of all time. Messi and Ronaldo are both amazing players and have had great achievements in their careers.