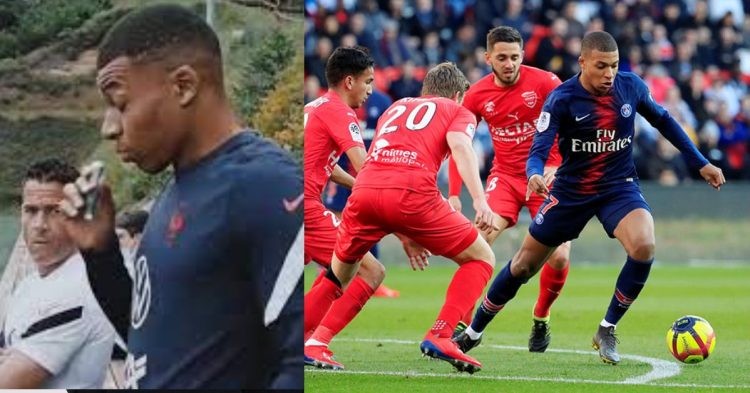 Kylian Mbappe has been accused of using a vape before a match. (Credits: TikTok & Reuters)

French soccer star Kylian Mbappe has been accused of using a vape before a Ligue 1 match in 2019. In a viral video on TikTok that is being shared online, Mbappe’s mouth is seen on a piece of vape-like equipment before a game. The video then moves on to the match footage from a Paris Saint-Germain vs Nimes match in 2019. Mbappe is seen deliberately using his hand to score and then making it look like nothing had happened.

During the play that is shown in the video, Thiago Silva glanced a header toward the goal from a corner and Mbappe met it with his hand near the post. The ball was going wide off Silva’s header but Mbappe turned it in blatantly with his left hand. The referee booked Mbappe with a yellow card for a blatant handball.

The video accused Mbappe of using vape before a game and the creator even commented that “he was high during the game.” Fans have, however, rued the allegations and given their views. One fan said, “That’s got nothing to do with vaping.”

A few fans claimed that it was something he uses to gain energy before a match and nothing illegal. One of their claims was, “It’s a gogo squeeze.”

Another fan said, “its an energy gel thing the players use before a game for protein and energy.”

One fan blamed the creator and said it is an “energy shot get it right for once.”

PSG won the match 3-0. It was their 14th successive win. Mbappe bagged a brace on the day and scored his 50th Ligue 1 goal. At that point, Mbappe was 20 years, two months, and three days old. He had become the youngest player in 45 years to reach 50 Ligue 1 goals.

Did Kylian Mbappe really use vape before a game?

World Cup winner and two-time World Cup finalist with France, Kylian Mbappe, is full of skill and talent. His speed and acceleration know no bounds. Therefore, it is natural for fans to think that he uses supplements to help him maintain that level. It is, however, unlikely that he does so.

Mbappe has been accused of using vape before a match but it is evident that whatever that is, it is not vape. It is highly likely that the fans defending it are correct. It must be some energy booster that he uses in a completely legal and harmless way. Another clear giveaway includes the fact that there is no smoke following his use of the vape-like material.