Kylian Mbappe Attempted to Make Neymar Look Weak, but the Brazilian Displayed His Power Like That of a “UFC” Fighter 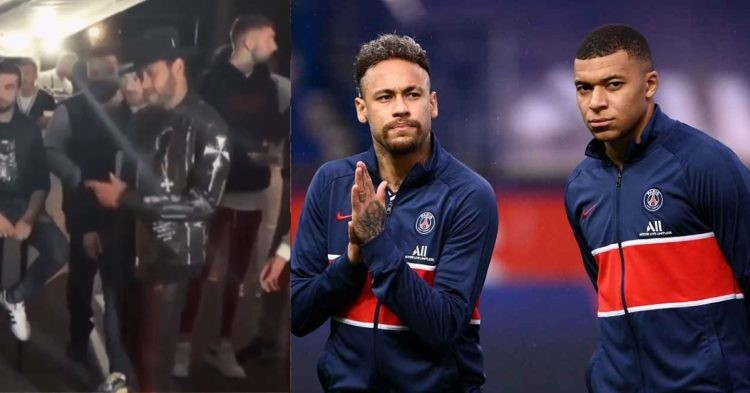 In a viral video on Instagram, Kylian Mbappe and Neymar Jr. have been compared to boxers. The Paris Saint-Germain stars had a go at the boxing machine which gives you points according to how hard you hit it. Harder the hit, the more points. Neymar did so well, a fan claimed he had UFC-athlete-like power.

First, Mbappe is seen giving it his all and getting a score of around 673. However, during the course of the punch, he gets hurt and holds his hand. After Mbappe’s hit, Neymar, who was dressed up in a funky style with a hat, is shown taking his attempt at the boxing machine. The Brazilian scored almost 800 points and did it with ease.

The incidents in the video probably occurred in late 2021 when sportspeople testing their strengths on the boxing machine were a viral thing.

Anthony Joshua was also at it when he displayed his right hook on the Graham Norton Show. The 6 feet 7-inch fighter registered an impressive score. Deontay Wilder and Andy Ruiz Jr also were part of the activity. They took their turns on the same TV show and machine. Ruiz got the better of Wilder’s score of 927 with a record-breaking 967. However, Wilder did not use his stronger right hand due to injury.

Former World’s Strongest Man Eddie Hall also took part in the viral fun and broke the machine. He hit a vicious-looking strike to manage to break it.

Fans were impressed with how Neymar performed against the boxing machine and disappointed with Mbappe’s attempts. One fan connected Neymar’s power to Brazil and how they are well represented at the UFC, “Brazilian power lol. No wonder brazil reigns the ufc lol”.

Another fan was all praise for Neymar, “Man of the game Neymar . Multi- talented”

On the other hand, one fan went on the offensive against Neymar, saying he learned his art in childhood owing to how he screams while playing. The fan commented, “Neymar had to learn self-defense in his childhood when you see how he plays and screams”.

Mbappe and Neymar recently featured in the exhibition friendly against the Riyadh All-Star XI. Lionel Messi, Cristiano Ronaldo, and Mbappe got on the scoresheet but Neymar missed a penalty and could not get his name on it. PSG won that match 5-4.
Tags: Kylian MbappeNeymar
Previous Post