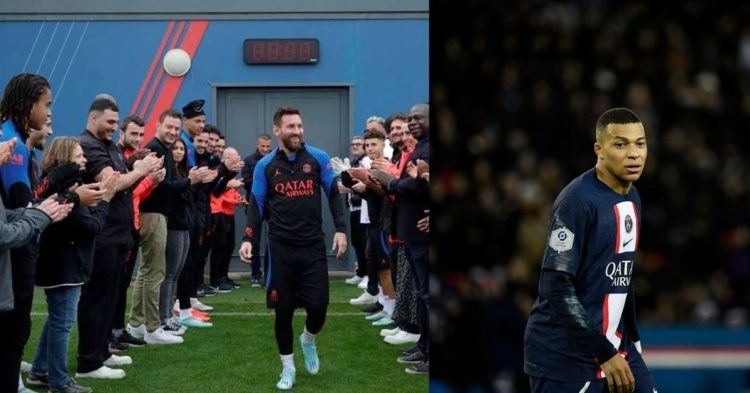 Kylian Mbappe’s brother, Ethan Mbappe, welcomed Lionel Messi back at Paris Saint-Germain as he returned to his club on Wednesday as a FIFA World Cup winner. Messi returned to the training ground of the Parisians and received a guard of honor from the club members.

Messi was adjudged the best player at the recently concluded FIFA World Cup 2022 in Qatar and received the Golden Ball. He played a pivotal role throughout the tournament to help his nation lift the trophy. He scored a brace in the final and converted a penalty in the penalty shootout to seal Argentina’s victory. In the process, however, another PSG star had to face disappointment.

Kylian Mbappe also had a fantastic run at the World Cup in Qatar. He won the Golden Boot after scoring eight goals in the tournament. He scored a hat-trick in the final to help France level the score 3-3 against Argentina and even converted his spot-kick in the shootout. But, it was not to be for the Frenchman.

A guard of honour for our World Champion! 👏❤️💙#BravoLeo pic.twitter.com/OHIkKALbUl

MBappe returned to training just days after the World Cup final but Messi took his time. The Argentine was given a 10-day break during which he celebrated in open-top bus parades in his hometown of Rosario. And now, the seven-time Ballon d’Or winner returned to training ahead of PSG’s Coupe de France clash against Chateauroux on Friday.

Ethan Mbappe was present during the guard of honor and welcomed Messi with a round of applause. The 16-year-old brother of Kylian was applauding Messi’s achievement in the absence of his elder brother. To commemorate Messi’s World Cup triumph, the Argentine was also awarded a gold-plated trophy by a PSG official after the guard of honor.

Where was Kylian Mbappe when Lionel Messi returned to PSG training

As Messi returned to training and received his acclaim from the members of the club, Kylian Mbappe was not around to congratulate his teammate. Apparently, Mbappe had flown to the USA.

A number of PSG players were given leave after their disappointing 3-1 defeat to Lens on Sunday. The World Cup finalist and his friend Achraf Hakimi were two of those players.

Both the players used their off days to jet off to New York to watch basketball. They were spotted watching the NBA side Brooklyn Nets beat San Antonio Spurs with a scoreline of 139 – 103. On being shown on the big screen, the Frenchman was given an incredible reception by the crowd.