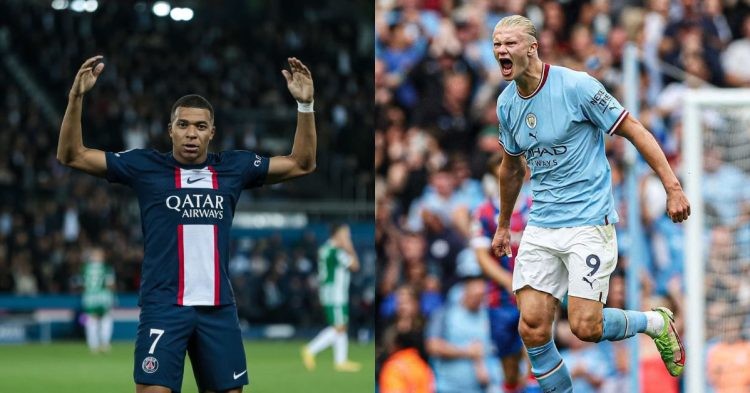 Erling Haaland has been in exceptional form so far in the 2022/23 season. Since joining Manchester City in the summer, the Norwegian has been one of the best soccer players in the world. He has scored 23 goals and has made 3 assists in 17 games. The Pep Guardiola-led side is sitting in 2nd place in the English Premier League, just 2 points behind league leaders Arsenal. One player who has always been compared to Haaland is Kylian Mbappe.

The PSG superstar has been under the spotlight for a few months now. The main reason for that would be his contract situation with the French club. Mbappe teased the move to Real Madrid for many months before eventually signing a new contract with PSG. However, this season, he has declared that he is happy in Paris and his performances indicate that as well. Mbappe has scored 18 goals and made 5 assists in 19 games.

Erling Haaland has overtaken Kylian Mbappe as the most valuable player in the world, according to Transfermarkt 🤑 pic.twitter.com/LsKteDl5Re

A recent statistic that has caught the attention of soccer fans is that Haaland is now worth more than Mbappe in market value, according to Transfermarkt. Mbappe has been the most expensive player in the world for a while now. And the fact that the Man City striker is now worth more has left the soccer community divided.

How much is Erling Haaland worth?

The website states that Norwegian international is worth about $176 million (170 million euros) as of November 2022. On the other hand, Transfermarkt has gathered that Mbappe is worth around $165 million (160 million euros). The soccer world has reacted to this since the statistic went viral on Twitter.

We all know which player has more quality

A fan said, “We all know which player has more quality” without disclosing much about they think is the better player. However, that isn’t the case for other fans as well.

Anyone saying Mbappe is better than Haaland need their heads examined.

Won’t give him a world cup.

Many have criticized Haaland for being a goal poacher. It is quite true that he has scored more tap ins than Mbappe, but that speaks at length about his ability to find empty spaces in the opposition box. Haaland’s off the ball movement is almost second to none in the current era. Moreover, a fan also claimed, “Won’t give him a world cup.”

This was a shot taken at Haaland in support of Mbappe. The French star has a World Cup to his name, which he won in 2018 in Russia. Mbappe also scored 4 goals in that year’s tournament and won the prestigious trophy as a teenager.

Some of the soccer community has also taken a jibe at Kylian, addressing him as “Mpaypal”. The context is that fans believe he was money-driven rather than ambition he signed a lucrative contract with PSG to reject Real Madrid. In addition to that, a Twitter user has let the world in on some valuable insight. They have outlined the differences between Haaland and Mbappe as players.

Mbappe is a lethal forward, He has frightening pace, good finisher and can also play as a winger.
Haaland is a perfect no 9. Great strength,great speed, good positioning and fantastic finishing.

They both compared a lot but are two very different players.

The tweet mentioned that Haaland is a complete striker with good positioning and finishing. On the other hand, Mbappe is a fast winger who can also play as a striker. The reality is that Mbappe plays more on the side compared to Haaland. Although the market values may cause fans to compare them, they are indeed two different players playing in different positions.