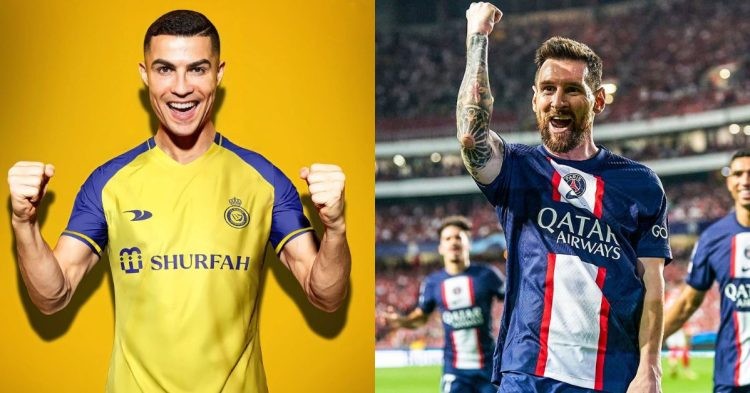 The comparison between Lionel Messi and Cristiano Ronaldo seemed to be over once and for all with the Portuguese’s move to Saudi Arabia. However, the Argentinean could be on his way to adding the one last chapter to their legendary rivalry.

Cristiano Ronaldo, late in 2022, made his latest move to the Saudi Arabian outfit Al-Nassr after his disappointing end at his former club and at the World Cup.

On the other hand, Lionel Messi won the World Cup with Argentina and is having a fantastic season with PSG as well. Cristiano Ronaldo’s move was heavily criticized by the majority of soccer fans. However, as insane as it may sound, it seems like Lionel Messi will follow his eternal rival to Saudi Arabia.

BREAKING: Al Hilal, Al Nassr's biggest rival, would like to sign Lionel Messi and are ready to offer him just under double what Cristiano Ronaldo is earning 🤑🇸🇦 pic.twitter.com/xZFuSSoFPP

Ffs leave Ronaldo alone, let him be the best at least in Saudi Arabia.

Glad the goat will get paid what he is worth

Lol Ronaldo Is just too big of a player
Went to Arab and can't even retire in peace
Media, Agenda and Messi still following him lol

Lionel Messi’s ongoing contract will end in the summer of 2023. Fans went crazy as soon as The New Arab reported that Lionel Messi’s father Jorge was in Riyadh. The potential reason is Leo Messi’s move to Al-Hilal.

Fans are speculating that Messi is willing to be the best-paid soccer player in the world. Soccer fans reacted rather sarcastically to the news and said Messi won’t let Ronaldo be the best player even in Saudi Arabia.

Cristiano Ronaldo penned down the biggest contract in the history of the sport with his two and a half years deal with Al-Nassr. He will earn a massive $214 million every year, which makes him the highest-paid soccer player ever. This can change drastically in the summer if Al-Hilal manages to sign the Argentinean, given his prior good relations with Saudi Arabia.

Al-Nassr and Al-Hilal share a massive rivalry as the most successful clubs in the country. On January 19th Al-Nassr and Al-Hilal, all stars will play a friendly match against PSG. Messi and Cristiano’s supposed last face-off can be the start of a new rivalry in Saudi.

🚨 Al Hilal, Al Nassr's biggest rival, would like to sign Lionel Messi and are ready to offer him €300M/year. 🇦🇷🇸🇦

Just under double what Cristiano Ronaldo is earning. 🤑

Al-Hilal has reportedly offered the 35-year-old a stunning $300 million per year deal. It will potentially be another significant jump by the Argentinean to be the best-paid player.

Lionel Messi is the brand ambassador of Saudi tourism and the Riyadh-based club believes it can play a pivotal role in the move. Also, Al-Hilal’s path may be a bit more clear since ex-Barcelona board members leaked chats may make Messi choose the Saudi club with less hesitation.

Conclusively, if Messi decides to join Al-Hilal in the summer, fans will see the two greats of the game competing against each other for a few more years.