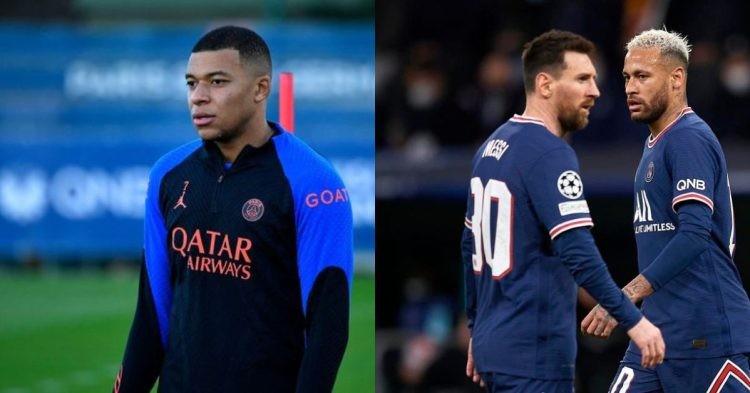 Kylian Mbappe names his favorite clubmate and it is neither Lionel Messi nor Neymar Jr. (Credits: Goal & Twitter)

French soccer player Kylian Mbappe has named his favorite teammate at the club level. Mbappe, who plays for Paris Saint-Germain was asked about his favorite player at the club. The 24-year-old answered without thinking and his answer was neither Lionel Messi nor Neymar Jr.

In a YouTube Short posted by Sports Illustrated Soccer, Mbappe was asked a few personal questions. Firstly, he was asked who his favorite player in France is. He took a while and answered Ousmane Dembele. Next, he was asked, “Who is your favorite teammate on PSG?” He answered in an instant, “Achraf Hakimi.”

The video continues and Mbappe is asked about his favorite food, he replied, “pasta.” When asked about who the best player in the world is, the French star said, “me!”. This answer was followed by a flurry of laughter.

On December 18, 2022, at the Lusail Stadium in Qatar, Messi bagged a brace while Mbappe scored a hattrick to end the match 3-3 after extra time. Argentina, however, prevailed in the penalty shoot-outs due to some Emiliano Martinez heroics.

Following the difficult loss in Qatar, Martinez heavily mocked Mbappe while Messi watched on. However, the 24-year-old sensation came back to training for the club early and went on his vacation when PSG gave a break to a few players. As he was on his break with his favorite clubmate Hakimi, Mbappe missed Messi’s return to training.

On Thursday, Mbappe returned and fans were curious about his first meeting with Messi after the final. According to Le Parisian, the two PSG stars have an understanding and are focused on coexisting and doing well in the second half of the 2022-23 campaign. Their aim is to clinch PSG’s maiden Champions League title.

On Saturday, PSG posted a video of their preparations for their next match and it shows Mbappe and Messi enjoying their time at Camp des Loges. Mbappe also posted a picture on Instagram captioned, “good vibes only”.

The defending champions of the French league will face Stade Rennes next on January 15. They are just a month away from the big clash against Bundesliga champions Bayern Munich in the UEFA Champions League round of 16.