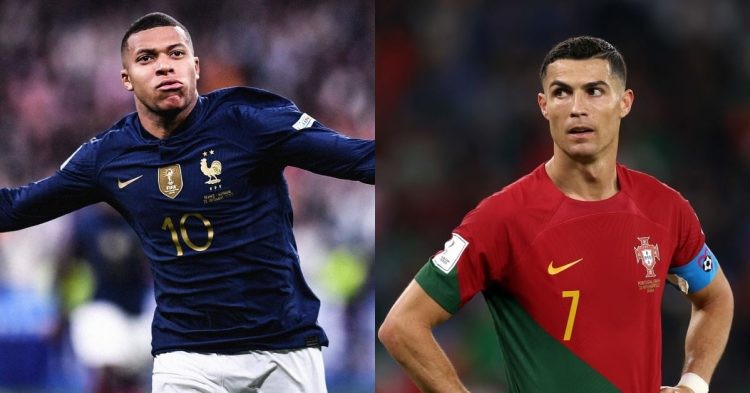 Cristiano Ronaldo hasn’t had the best World Cups this year. It started great when he scored from the spot in Portugal‘s opening game against Ghana. Since then, Ronaldo hasn’t been able to find the back of the net for his country. He came close against Uruguay when his head almost touched the ball from Bruno Fernandes’ cross. However, the goal was given to the Manchester United midfielder in the end.

On the other hand, Ronaldo’s rival on the stage, Lionel Messi has been having a fairytale of a World Cup. He has managed to get on the scoresheet thrice for Argentina so far. Apart from that, Messi also has been heavily involved in Argentina’s attacks and big chances. He has also surpassed the one and only Diego Maradona in World Cup goals.

It seems like the PSG superstar is looking to lead his South American nation to the World Cup trophy this year. However, Messi isn’t the only star to have the edge over Ronaldo.

France has been exceptional in this year’s World Cup. Apart from the 1-0 loss to Tunisia in the last group stage game, France has done pretty well to defend their World Cup title. They beat Robert Lewandowski’s Poland in style. Kylian Mbappe was the star of the show as the defending champs won 3-1. The PSG star has been on electrifying form this year as well.

Mbappe has 5 goals at this year’s World Cup. And the interesting fact is that he has surpassed the great Cristiano Ronaldo for most World Cup goals. Ronaldo has featured in 5 World Cups and has managed to bag 8 goals. Mbappe on the other hand has 9 goals to his name. Many might argue that it isn’t fair to compare Ronaldo with the 23-year-old, because of the teams they have played on.

Kylian Mbappé is built for this stage 🌟 pic.twitter.com/YLOZygDpaO

Let’s not forget that he scored 4 goals at the 2018 FIFA World Cup, and won the golden trophy when he was just 19 years old. In addition to that, 2 out of the 4 goals he scored were against Messi’s formidable Argentina. He bagged another one against Croatia in the finals. The fact that he shows up on the big occasions for France shows how big of a threat Mbappe is.

Ronaldo is arguably the greatest soccer player of all time, along with Messi. Despite his age, the 5x Ballon d’Or winner still appears to be a huge threat in the box. He will be aiming to lead Portugal to the World Cup title this year, just like he led them to the Euros championship in 2016.