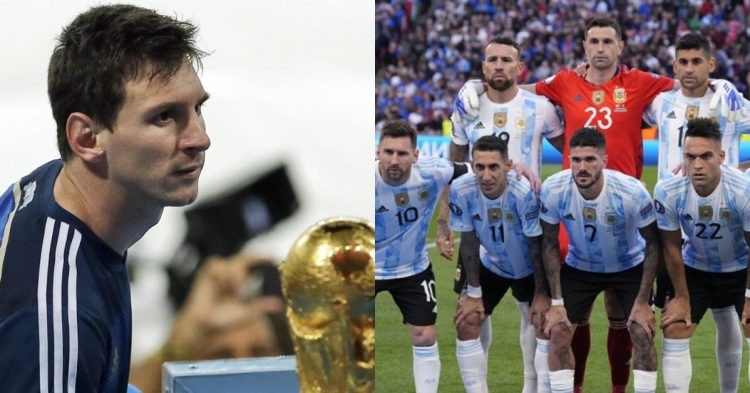 Lionel Messi and Argentina are favorites to win the FIFA World Cup this time around. This is Messi’s last World Cup, and many want the Argentine to get his hands on the coveted trophy. Emi Martinez, Christiano Romero, Lisandro Martinez, Angel di Maria, Lautaro Martinez, and Paulo Dybala are all part of a star-studded Argentina squad.

All stars seem to be working wonderfully as a team under Messi’s captaincy. But the Argentine captain has said that Argentina is not quite the favorite for this World Cup. He has named three other teams to be the ones most likely to win the World Cup.

Messi named Brazil, France, and England as favorites for this World Cup, which many have considered a very humble opinion from Messi. A supercomputer has also predicted that Argentina will win the World Cup. The supercomputer used by BCA Research headquartered in Canada predicted a Portugal-Argentina final for the Qatar World Cup.

🚨 An AI supercomputer has predicted the outcome of the World Cup and it says England will lose to Portugal in the semi-finals via a penalty shoot-out. 🏴󠁧󠁢󠁥󠁮󠁧󠁿❌

Cristiano Ronaldo and co will then face Argentina in the final and Messi will win the trophy. 👀

According to the predictions of the supercomputer, Argentina will emerge as victors of the finals. As per a report from The Sun, the computer used EA Sports FIFA video game player statistics and a sample of all real-life matches from the last four World Cup tournaments. Argentina would beat France in the Round of 16 on their way to their first World Cup since 1986, according to the supercomputer.

🗣️ Fabrizio Romano: “Sources close to Messi say he will decide his future in 2023, not now, Barcelona is discussing internally about his return and Paris will try to renew him.”

– “The player’s environment confirms that no decision has been made and nothing is advanced.” pic.twitter.com/k6VnVq428I

Lionel Messi has scored 6 goals in the World Cup and provided three assists. He has appeared in every World Cup since 2006, similar to Cristiano Ronaldo. If the supercomputer’s predictions are correct, this World Cup final will be one of the most watched events for quite some time. Argentina start their World Cup campaign on 22nd November against Saudi Arabia, before taking on Mexico and Poland later in the month.