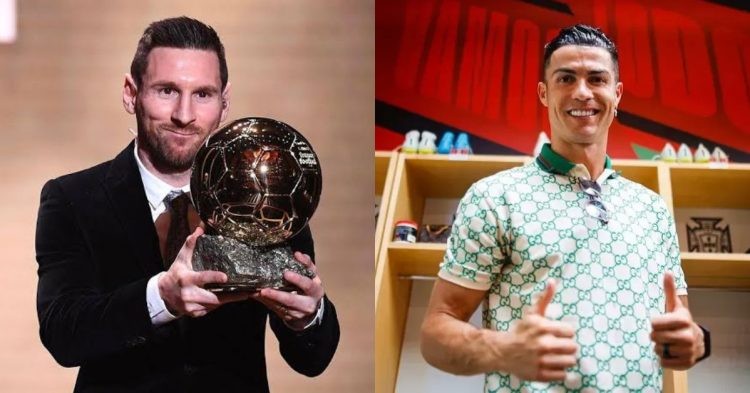 Because of Lionel Messi, Cristiano Ronaldo briefly thought about retiring in 2019. This week, Thierry Marchand published a new biography of Cristiano Ronaldo in which the writer sat down with the now-Manchester United player in 2019.

The revelation that Messi nearly forced Ronaldo to retire that year is among the things he stated during that chat that was eventually included in the book.

While Messi was still playing for FC Barcelona at the time, the Portuguese superstar was in his second season at Juventus. For the first time since 2007, neither player took home the Ballon d’Or, which went to Luka Modric of Real Madrid for his outstanding play for Croatia back in 2008.

Ronaldo said in an interview, “It’s easy to stay in your bubble when you’re successful. If Messi wins the Ballon d’Or this year, I’m leaving football.”

Furthermore, he added, “I took a risk coming to Turin. I changed clubs, championships, football culture, I took a risk and it was that risk that, I’m sure, made me not win the Ballon d’Or in 2018.”

In the end, Messi did take home the trophy, winning it for a record sixth time, closely followed by Liverpool center-back Virgil van Dijk and Ronaldo, who came in third.

2019 Ballon d’Or winner Lionel Messi of Barcelona took home the trophy at the 64th annual event in Paris. France Football presented the prize, which honored the world’s top player for the entire year 2019.

Lionel Messi from @FCBarcelona is the 2019 Ballon d'Or winner! THAT'S HIS SIXTH ONE! #ballondor pic.twitter.com/dLndTZNeeW

Messi received his first Ballon d’Or since 2015 with the victory. Messi scored five goals for Argentina that year and 51 goals in 50 appearances for Barcelona in 2019 season.

In that year, Messi had contributed 63 goals for club and country, including 46 goals and 17 assists as the playmaker assisted Barcelona in retaining their La Liga title.

Messi said in an interview, “I would like to thank all of the journalists who voted for me and wanted me to have this prize.”

“I took this risk of moving to Juventus which I am sure caused me to lose the Ballon d'Or last year [2018]. If Messi wins the Ballon d'Or this year (2019), I'll RETIRE from football." pic.twitter.com/SrU1dDdHkp

How many Ballon d’Or did Cristiano Ronaldo and Lionel Messi win?

The Ballon d’Or award, which is often known as the “best player in the world” accolade, is regarded as the highest individual honor in football.

Lionel Messi, who has won the Ballon d’Or seven times, holds the record for the most accolades ever received by a player. Behind him is Cristiano Ronaldo, a longtime adversary of Messi’s who has won five Ballon d’Or medals.

Lionel Messi and Cristiano Ronaldo have dominated it in recent years, taking home 11 of the 13 awards since 2008; Luka Modric briefly ended their monopoly in 2018.