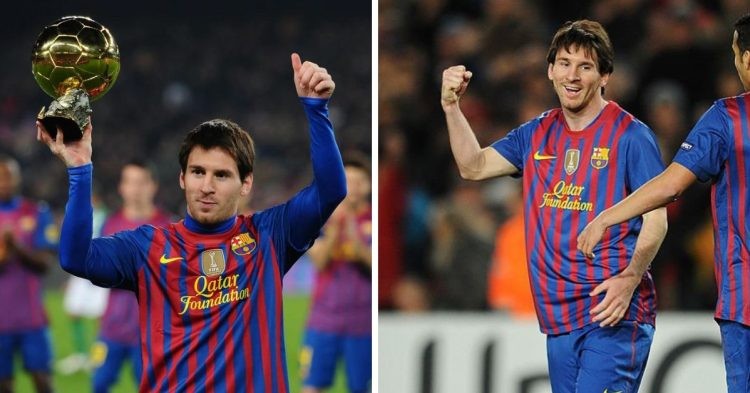 However, in 2012, Messi was not in the best shape. Struggling with his weight, he was reported to be overweight, much to the surprise of fans and pundits alike. Despite this, Messi was determined to continue playing, and he did.

In 2012, Messi achieved the impossible. He scored an astonishing 91 goals in the calendar year, setting a new record for the most goals ever scored in a single calendar year. He achieved this feat despite being overweight, proving that he was more than capable of performing at the highest level. 79 in 60 appearances for Barcelona and 12 in 9 matches for Argentina.

Messi’s incredible record in 2012 highlights the importance of physical fitness in soccer. It also shows that even when players are not in their best shape, they can still perform at a high level. Messi’s achievements in 2012 were truly remarkable, and they will be remembered for many years to come. He showed that even when faced with adversity, he was still capable of achieving greatness.

It is widely predicted that Leo Messi would be one of the most accomplished players in the sport, and he did not let anyone down. By 2012, he had won four consecutive Ballon d’Or awards, at the age of only 25. Lionel Messi’s playing style makes him a difficult opponent to contain. It’s impossible to teach someone to possess the same level of ball control as Messi, but even he needs to be in peak physical condition to compete at the highest level.

According to some news outlets, Messi had been eating too many pizzas last season, resulting in Lionel Messi’s weight gain. This didn’t cause any issues with his performance, though it wasn’t up to his usual standards. To remedy this, Messi managed to shed almost 8 pounds, and the difference was clear in his play on the pitch.

In 2012, Messi’s success demonstrated the importance of staying physically fit in soccer. Even when his level of fitness wasn’t at its peak, he was still able to put in an incredible performance. The magnitude of Messi’s accomplishments in that year will be remembered for a long time to come, proving that even if you are facing a struggle, you can still achieve greatness.