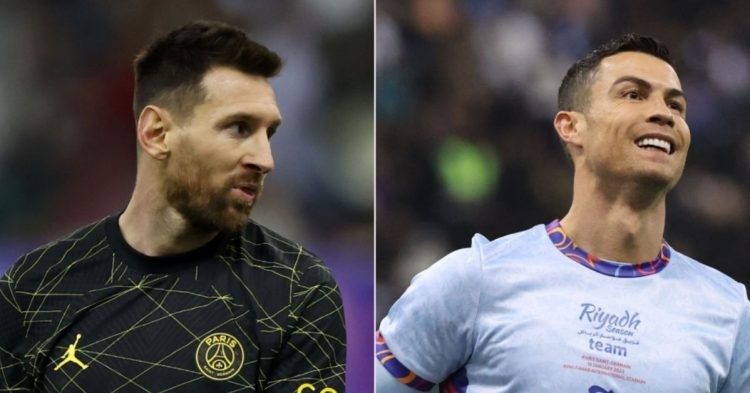 The world witnessed what could most probably be the final showdown in the historic battle between Cristiano Ronaldo and Lionel Messi when Messi’s star-studded PSG took on Cristiano’s new league mates in a friendly exhibition match in Saudi Arabia’s capital Riyadh. PSG defeated Riyadh XI by 5 goals to 4 in a stunning match where attacking talent was on display from both sides.

The world had been waiting for a battle to be played between two of the biggest legends in the game for so long now as the two giants have only faced each other once in the last 5 years in a UCL group stage game between FC Barcelona and Juventus.

Messi set the tone for the game in the very 3rd minute by tucking away a neat ball set up by Neymar but Ronaldo struck back in the 34th minute to level the score. This is the Messi-Ronaldo rivalry summed up, Ronaldo has always come from behind to level things with Messi but this time round, has Messi gone a step too far for Ronaldo to catch him?

The World Cup final win last month has surely and certainly put to bed whatever was remaining of the GOAT debate between the two as both had won every silverware possible and the one trophy that had eluded them both till now, Messi won that and he did so in style with a brilliant performance in the thrilling final on December 18th, 2022.

The debate has drastically shifted in favor of Messi after that night when he finished as World Champion and won the Golden Ball for a second time after winning in 2014. Cristiano has been one hell of a rival but we guess it’s finally over as he has moved away from Europe to play in Saudi. Messi posted an Instagram story that featured Ronaldo after he had the last laugh and hammered the final nail in the coffin of the GOAT debate.

Cristiano Ronaldo vs Lionel Messi: Stats against each other

The Argentine and Portuguese had faced each other 36 times before their meeting in Riyadh, most of which were in the El Clasico when Messi played for FC Barcelona and Ronaldo played for Real Madrid. In these meetings, Messi has the edge on goals scored but only by a single goal as he has 22 against Ronaldo’s 21.

Cristiano Ronaldo who has always been known for his rocket freekicks has surprisingly failed to score even one in a match against Messi while the Argentine has scored two free kicks. Messi leads Cristiano in the penalties scored department as well as he has 7 compared to Ronaldo’s 6.

The final area where Messi again beats Ronaldo is the wins as he has 16 compared to the Portuguese’s 11. Even though Messi has had the upper hand in their games against each other, Ronaldo’s brilliance in these games shouldn’t be ignored but both of them should only be appreciated for what they have given to the game, both of them hold each other in high regards and their fans should be doing the same.