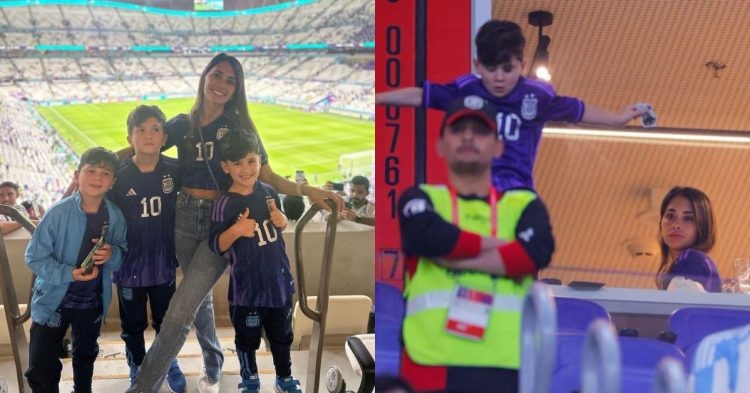 Lionel Messi's family cheering him on at the FIFA World Cup 2022. (Credit: Twitter)

Argentina’s last outing in the FIFA World Cup was eventful enough, to say the least, and even more so for Lionel Messi’s son, Mateo Messi.

Leo Messi‘s side took on the Socceroos in their round-of-16 fixture. The man himself was central to their victory. He curled the ball into the bottom corner of the net and set Argentina up for a strong finish.

The second goal was bagged by Julian Alvarez to conclude Argentina’s 2-1 victory.

While his father had a busy day at the office, fighting for Argentina’s progression to the quarter-finals of the World Cup, Mateo Messi, Leo Messi, and Antonella Roccuzzo’s second son was keeping himself busy.

In a video recorded by a fan in the game against Australia, the camera focused on Messi’s family. What followed, quickly became viral all over the internet, and proved to be quite embarrassing for the Messi family.

As the camera zoomed into Messi’s family who was sitting in the stands and cheering on Argentina, Mateo Messi was recorded throwing a piece of chewing gum toward the crowd. Mateo was chewing gum while standing on top of his chair and holding his mother’s hand.

Out of nowhere, he decided to spit out the gum into his hands before flinging it across the stands, where the fans sat.

Some fans online branded little Mateo as the “Little devil”.

What did the little devil throw? Am I missing something or am I just blind

After Argentina’s opening game defeat against Saudi Arabia, Messi went on record saying that his family is very much like the rest of the Argentinian supporters. He said that his family also got emotional and passionate, just like the average La Albiceleste supporter.

Leo Messi: “After the game against Saudi Arabia, Mateo [Messi] left the stadium crying. Thiago [Messi] was doing the math, explaining to Mateo that if we won both game we would qualify.” pic.twitter.com/DRDgFH4q5y

The seven-time Ballon d’Or winner even went so far as to say that Mateo was found in tears after the defeat against Saudi Arabia. He recovered from his momentary sadness, however, after Thiago explained to him that if Argentina wins its next two games, they would still progress to the next stage of the competition.

As soon as the incident took place, Messi’s wife and Mateo’s mother, Antonella Roccuzzo were quite embarrassed and visibly so.

No sooner than Mateo flung the gum across the stands, she could be seen immediately correcting her son and setting him straight.

Bro who pissed Messi’s son Mateo off this much?? 😭😭 pic.twitter.com/GvK0snj7vY

This little moment of parenting could also be seen in the video recording, which earned Antonella quite some praise.

The incident did not did stir up any trouble among the crowd, though, as the euphoric celebrations of progressing to the next round had already begun.