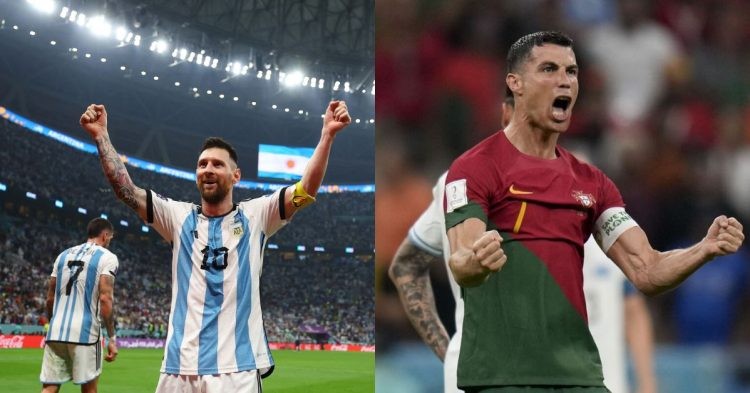 Lionel Messi or Cristiano Ronaldo has been a never-ending debate in the world of soccer. The debate truly started after Ronaldo’s move to La Liga in 2009, signing for Real Madrid, the arch-rivals of Messi’s Barcelona. While there seems to be no end to this debate, Messi has earned some points in his favor after he recently equaled a record held by Ronaldo.

After spending a well-deserved holiday in Argentina after winning the World Cup, Messi was finally back in action for his club, Paris Saint-Germain. However, Messi showed no signs of a holiday hangover, as scored a goal against Angers SCO in a Ligue 1 match yesterday. PSG secured a 2-0 victory courtesy of goals from the youngster Hugo Ekitike and Lionel Messi. However, Messi grabbed the headlines for another reason.

Head-to-head record in games against each other:

Messi scored a staggering 672 goals for his former club, FC Barcelona, in 778 performances. After last night, Messi has netted 24 goals for his current club, PSG.

Meanwhile, Ronaldo scored a total of 145 goals for Manchester United in his two spells at the Premier League club. Ronaldo also netted a club-record 450 goals in just 438 appearances at Real Madrid. Ronaldo also managed to score 101 goals over the three years he spent at Italian heavyweights, Juventus.

What other records of Ronaldo can Lionel Messi break this season?

Although Lionel Messi has broken Cristiano Ronaldo’s record of most goals for teams in the European top five leagues, it doesn’t look like Messi is going to stop here. Messi is already eyeing some more records held by the former Real Madrid talisman.

Ronaldo also has a total of 701 goals in all competitions in European soccer. Messi, with 696 goals, needs just 6 more goals to break Ronaldo’s record (via messivsronaldoapp).

Messi will also aim to break Ronaldo’s record for most international goals. Ronaldo currently has 118 goals for Portugal, while Messi netted 98 times for Argentina. However, neither Ronaldo nor Messi has stepped down from international soccer. Therefore, Messi will not find it easy to break this record of Cristiano Ronaldo.