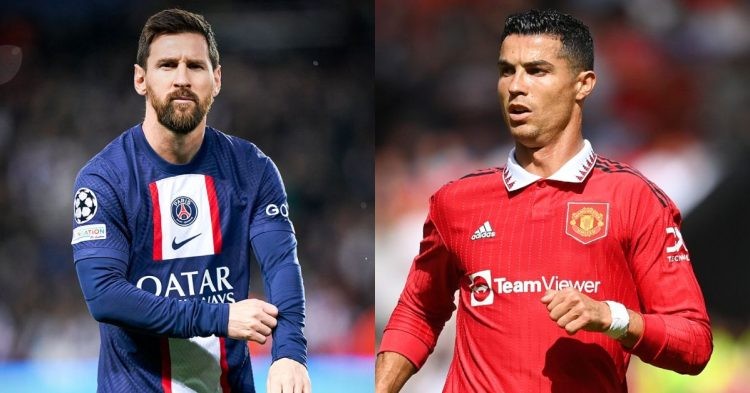 Cristiano Ronaldo and Lionel Messi are two of the greatest soccer players to ever grace the beautiful game. There have not been any other players to have the same impact as these two players did so far. In the last 20 years, both Ronaldo and Messi have dominated soccer in every aspect possible. Their standards have made it seem like there can never be another Ronaldo or Messi.

Both of them used to play for Real Madrid and Barcelona in Spain. If the El Clasico rivalry between the two teams wasn’t enough, both the two players had a rivalry between themselves as well. We all know how they pushed each other to the greatness we have been witnessing so far. Apart from the on-field numbers, they have been competing off it as well.

Who earns more from contracts: Cristiano Ronaldo or Lionel Messi?

The entire soccer world was caught by surprise when Leo Messi signed for PSG last year. Many of us believed that he would never leave his beloved Barcelona. The main reason for his departure would be La Liga’s salary cap, which Barcelona could not follow. Hence, Messi had to sign a contract with PSG as a free agent last summer.

According to various reports from L’Equipe, Messi is earning about $780,000 per week at PSG. How does it compare with Ronaldo’s salary at Manchester United? As we all know, Ronaldo signed with the club where it all started at Old Trafford. In September 2021, he signed a two-year contract with United. Ronaldo was making about $540,000 per week.

However, after Man Utd failed to qualify for the UEFA Champions League for the 22/23 season, many reports have emerged mentioning that the Portuguese striker has had to take a pay cut. He is making about $440,000 per week right now at Man Utd. It seems like Messi has the edge over Ronaldo in salary earned.

The entire world knows that these two players are the face of the sports brand they have deals with. Messi has been with Adidas since 2006. On the other hand, Ronaldo signed for Nike in 2003, the year he signed for Manchester United. Both Messi and Ronaldo have lifetime deals with Adidas and Nike. Moreover, they represent plenty of brands, which is not surprising considering the impact they have on the world.

The brands that Messi represents include Adidas, Huawei, Gatorade, Pepsi, Lay’s, and MasterCard among many other big names. As for Ronaldo, the former Real Madrid star represents Herbalife, Tag Heuer, and Clear. According to Forbes, the 5x Ballon d’Or winner made $55 million off the field. That includes money coming in from his endorsement deals, along with the income from Ronaldo’s huge brand.

PSG superstar Lionel Messi has also raked in tens of millions in endorsement money. The 35-year-old made an estimate of $40 million recently.

What are the businesses owned by Messi and Ronaldo?

For those who don’t know, Cristiano is the owner of a global brand known as “CR7”, which has a clothing, innerwear, and cologne section. In addition to that, Ronaldo also owns numerous hotels known as the Pestana CR7. The hotel has branches across the world in Madeira, Lisbon, Marrakech, New York, and Madrid.

On the other hand, Messi owns a few brands on his own too. He launched his own store, The Messi Store back in 2019 when he was with Barcelona. He has investments in real estate, houses, etc. across the world.

Leo Messi acquires the hotel Es Vivé of 52 rooms in Ibiza built 4 years ago. The hotel will be renamed MiM Ibiza and will be managed by Majestic Hotel Group. Second hotel acquired by MiM (Leo Messi) after acquiring hotel in Sitges. #hotels #assetmanagement #resorts pic.twitter.com/oNt0hgvdbO

Just like his former El Clasico rival, he is quite big in the hotel industry too. Leo is in partnership with the Majestic Hotel Group. The company has hotels all over Spain in Mallorca, Andorra, Ibiza, Baqueira, and Sitges. In addition to that, Messi is also recently launched a new company.

He has raked in hundreds of millions over the years but it seems like Ronaldo might be the frontrunner in earnings made through companies and endorsement deals.

How does Ronaldo’s $24 million car collection compare with Messi’s?

It is no secret that Ronaldo is a huge car enthusiast. He has posted various images and videos of his costly Bugatti. An interesting fact is that his bodyguard has even crashed the expensive car once. The United star’s car collection is worth about $24 million. It includes a Bugatti which is worth $12 million, several Ferraris, a McLaren Senna, two Rolls- Royces, and a Mercedes G-Wagon Brabus that his girlfriend gifted for his 35th birthday.

Cristiano Ronaldo’s car collection is something else 🤑 pic.twitter.com/xvqDrObUAM

Ronaldo may have a costly car collection, but does he beat Messi in this aspect? The exact value of Messi’s car collection has not been disclosed, simply because the PSG star does not reveal much of his cars to the world. However, he does own a Ferrari F430, Pagani Zonda, Maserati Gran Turismo, Range Rovers, and a Cadillac Escalade.

What are Messi and Ronaldo’s net worth?

Many would have expected them to have a higher net worth, but soccer was not always a sport filled with lucrative contracts. Both Messi and Ronaldo have managed to stay at the top for two decades now and they still show from time to time that they still have what it takes. As far as the comparison goes, it seems like Ronaldo has a bigger net worth than Messi.