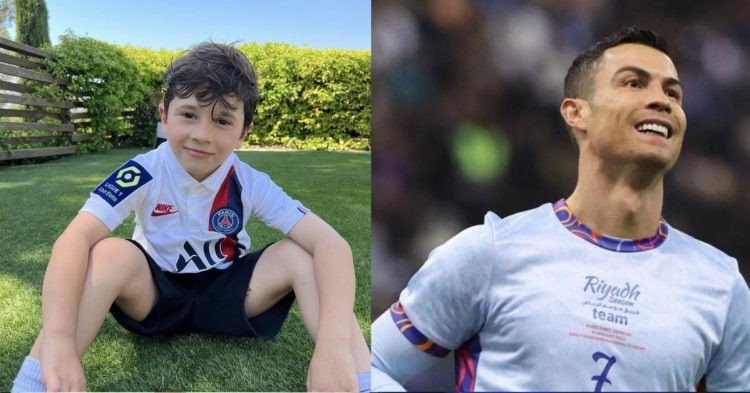 Soccer fans all over the world are divided into two groups based on the biggest rivalry in soccer and probably the whole sporting industry, the rivalry between Lionel Messi and Cristiano Ronaldo. The two have been going head to head for more than 15 years in a bid to get a step ahead of the other and in the process, both have left behind a legacy like no other.

Fans have always been divided over who the better player is but in a shocking turn of events, it is being reported that Messi’s second-born, Mateo Messi Rocuzzo, is a Real Madrid and Cristiano Ronaldo fan in secret. The news got reported after Messi was speaking to TyC Sports. The 7-time Ballon d’Or winner told the reporters that Mateo likes to troll his father over FC Barcelona’s loss to Liverpool in 2019.

Lionel Messi has already revealed in the media how his eldest son, Thiago, is a Ronaldo fan and how he keeps on asking about the Al-Nassr player every now and then. Thiago doesn’t shy away from criticizing his dad after bad performances which is very rare and he also likes to question his dad about other players like Kylian Mbappe and Neymar Jr.

His elder brother might criticize his father but the younger one doesn’t just criticize but trolls his father over his losses, and he doesn’t stop with his father as he goes on to troll even his brother during Real Madrid matches. Lionel told the Media that Mateo likes to scream and cheer Real Madrid when they score to piss his brother off.

Lionel said: “Sometimes the telly is on and he cheers Madrid’s goals. My son Tiago gets annoyed and Mateo cheers them to annoy him.”

At home when Tiago and Mateo are watching football together, Mateo will celebrate Real Madrid goals to piss off his bro pic.twitter.com/LtskRIz6Ud

Lionel Messi said that Mateo likes to troll his father while they are playing around in their backyard. Mateo tries to get on his father’s nerves by telling him that he is Liverpool and Messi is Barcelona, and not only this he even tells him that he is Valencia and Lionel is Barca. This news has left fans in laughter after getting to know how little Mateo trolls his father.

Messi said: “We were playing at home and we’re going for a kick-about. Mateo said to me: ‘You’re Barça and I’m Liverpool, ‘cos I’ll beat you.’ The same with Valencia, ‘Valencia beat you right? So I’m Valencia. He’s got a lot to learn”.

These revelations have left fans guessing as to whether Mateo Messi Rocuzzo might be a Ronaldo and Real Madrid fan after all. Messi’s honest confession regarding his sons has left the media and fans in adoration of the Messi family where even a World Cup champion and 7 time Ballon d’Or winner isn’t left from getting trolled.