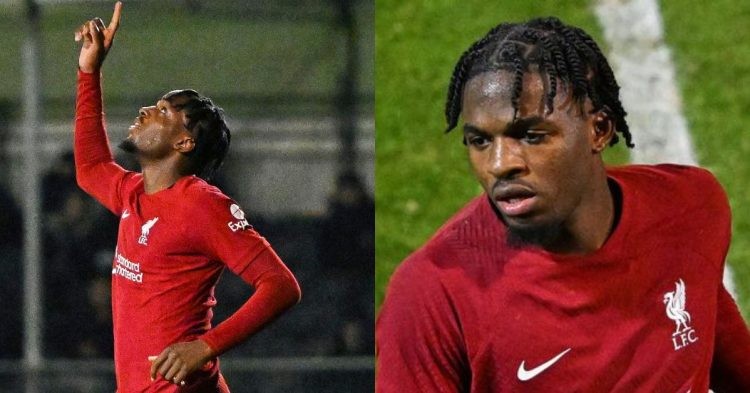 Liverpool center-back Billy Koumetio returned to the club this week after a loan spell in Austria and already has his name buzzing among Liverpool fans. He scored an outrageous goal in a contest against the PSG U21s. Koumetio humiliated the young PSG keeper by scoring from halfway out. A fan commented on Twitter, “Mans out there ruining that keepers career before it’s even began.”

We need to give players like this a chance now.. Bajetic, Koumetio, Carvalho, Start giving them a chance…

Koumetio is a French center-back, who is highly regarded by Liverpool. He has already played for the first team in a Champions League clash with FC Midtjylland in December 2020. During his loan spell at Austria Vienna, Koumetio notched up 15 appearances across all competitions. He has, however, been called back by the Reds. He might be the Liverpool savior after Virgil van Dijk picked up an injury.

Koumetio’s goal opened the scoring in the ninth minute of the Premier League International Cup clash on Wednesday evening. Luke Chambers got the second for Liverpool after he converted a penalty that was won by Mateusz Musialowski when he was brought down in the box. Koumetio got on the scoresheet again before half-time. This time with a well-placed header after beating his marker. The teams went into the half with Liverpool leading 3-0.

In the 62nd minute, 21-year-old Liverpool right-back Oludare Olufunwa added their fourth. He scrambled the ball over the line after a corner was nodded down. The Reds suffered a concentration lapse at the end. First, Tony Mendy scored for PSG five minutes from time and later, Noah Lemina netted a second. The match ended 4-2 in Liverpool’s favor.

In an exclusive interview with the ECHO, Koumetio explained in detail what went wrong in his loan move to FK Austria Wien. “At the beginning of the season, I didn’t play also. I had to improve and prove I was there and ready to play in any type of game. Cup games, European games or league games. I was preparing for that.”

He explained how he had worked hard in training throughout but still was not getting his chances. He got a few chances when there was an injury or an absentee but never settled in the squad. Also, according to an Austrian league rule, Austrian teams are awarded a small monetary bonus for each minute that Austrian nationals play. This made Koumetio’s chances of playing even dimmer in front of Austrian competition.

🚨 NEW: Liverpool are considering the termination of Billy Koumetio’s loan with Austria Vienna due to a lack of playing time. Koumetio has only made a single appearance for the side since September. [Football Insider] #LFC pic.twitter.com/NESbps9g6o

Liverpool was looking to bring him back due to these issues he faced with the Austrian club. Koumetio, however, came back and made a lasting impact with a fantastic goal. The PSG keeper Lucas Lavallee was spotted off his line by the Frenchman. He then took aim from inside his own half and tried to find the goal. He did just that. The ball found the top corner of the goal magnificently. It left the keeper as surprised as Koumetio himself.