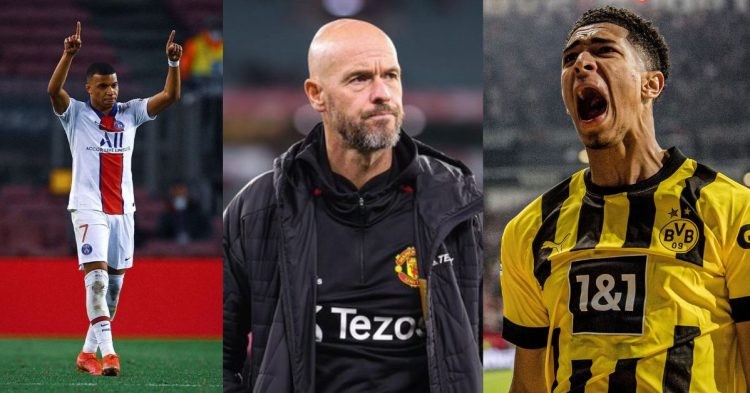 Life at Manchester United did not get off to the best start for Dutchman Erik ten Hag. However, after braving the initial waves of turbulence, the former Ajax head coach has now managed to steady the ship. Of late, the Red Devils have been in unbelievable form. Erik’s side has won 7 out of their last 7 matches in all competitions, with the latest victory coming against Everton in the FA Cup.

The Dutch manager has been credited with getting results on the pitch and handling the Cristiano Ronaldo Saga perfectly. It has also been reported recently that ten Hag’s side will seek to enforce a new rule. A weekly salary cap of £200,000 (approximately $241,000) is to be placed on players’ wage bills. This rule is reportedly being called the “Ronaldo rule,” and is being introduced to combat the gaps in the wages of the players.

Erik ten Hag: “Have you got some pennies for me?” 💰

Despite news of the new wage rule, an interesting video has gone viral online. In the clipping, Erik ten Hag can be seen in his car outside Carrington Training ground as he is swarmed by fans. The United boss engaged in a picture-cum-autograph session with fans waiting outside the training complex. While giving autographs, the Dutch tactician was questioned on potential marquee signings by fans.

One fan asked, “Erik, do you think you can sign Jude Bellingham?” To this, ten Hag smiled and replied, “I want to.” Another fan then asked, “What about Kylian Mbappe? How about both (Bellingham and Mbappe)?” Erik ten Hag jokingly replied with, “Aah, have you some pennies for me?” The fans then played along and told ten Hag that they would find the pennies.

What is the new “Ronaldo rule” at Manchester United?

In an attempt to harmonize the dressing room, this “Ronaldo rule” has been introduced at Old Trafford. The rule dictates a salary cap of $241,000 to be enforced gradually. This, reportedly, is being done to reduce the wage gaps among players to curb potential jealousy among teammates.

David de Gea has been told he will have to accept a pay cut if he wants to stay at Manchester United.
The club will not trigger the option to extend his contract on his current £375,000 weekly wage. Instead, they want to cut his pay by around £100,000. pic.twitter.com/iTXaXKYU90

The goalkeeper’s contract ends in the summer. It has been reported that he will be offered an extension, however, his new contract will be in line with the wage cap rule. The same goes for all new signings that the club makes in the future.

Currently, the highest earners at United include Marcus Rashford, Bruno Fernandes, Casemiro, Harry Maguire, Raphael Varane, and Anthony Martial. All these players reportedly fall in the wage bracket of $220,000-$240,000 per week.

Manchester United is one of those soccer clubs that is, at any given point, linked with multiple global soccer stars. United fans are also optimistic when it comes to marquee arrivals. Of late, however, the Red Devils have been less-than-impressive in the transfer market.

🚨🚨💣| BREAKING: Jack Butland has completed his move to #mufc on a six-month loan. 🧤 pic.twitter.com/YqorOozL00

Manchester United will be reportedly sold by the Glazer family in the first quarter of this year. This is why the owners are not spending this winter despite the need for a forward after Ronaldo’s departure. United, as a result, has only made a single signing in the winter transfer window. Goalkeeper Jack Butland has been signed from Crystal Palace on loan until the end of the season.

Manchester United have been offered the chance to sign Wout Weghorst as new striker — exploring the conditions of the deal as @footmercato reported. 🔴 #MUFC

€10m buy option is included in the deal so it’s up to Besiktas and Burnley. The player already gave his green light. pic.twitter.com/seVbedNtZP

Butland has been brought on loan to replace Martin Dubravka whose season-long loan at United was cut short by Newcastle. Fabrizio Romano reports that Manchester United want Wout Weghorst on loan from Burnley. Weghorst is currently on loan at Besiktas. The Netherlands World Cup star man has scored 8 goals and provided 4 assists for Besiktas this season.