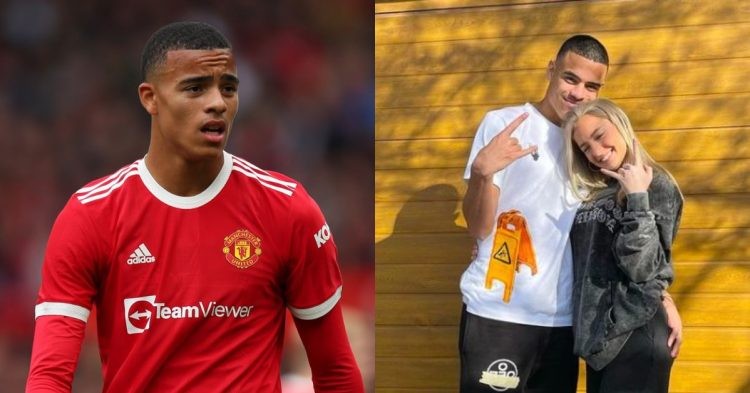 We have witnessed many world-class talents at Manchester United. One such talent was Mason Greenwood. His versatility and ability to be strong with both feet made him a dangerous threat to opposition defenders. Many pundits and former players even claimed that he will be Manchester United’s next big thing.

That’s if he already wasn’t. In United’s recent times, he brought the breath of fresh air the fans needed. That was when United was even struggling to make it into the Top 4. Mason was the young number 9 that United was looking for all this while. But as he was developing, Greenwood faced a huge problem. His then-girlfriend, Harriet Robson, uploaded a series of images and videos that caught the world by surprise.

Mason Greenwood of Manchester United has been accused of physical abuse 😳 pic.twitter.com/x4NbqVLpUg

Greenwood and Harriet have been dating since 2019. The 19/20 season was when he truly broke into the United team when they did not have a striker. The pair met each other when they were studying at the same high school. Both Greenwood and Robson enrolled at the Ashton on Mersey School in Manchester. In March 2021, Robson revealed to the public what Greenwood allegedly has been doing.

Together with a series of images of the altercations between her and Mason, Robson also posted disturbing audio, claiming that it was taken when Greenwood “attempted rape”, according to Robson. The images also showed Harriet with bloody marks on her face and bruises on other parts of her body. When the United board saw the images and videos circulating online, they released a statement.

“We are aware of images and allegations circulating on social media. We will not make any further comment until the facts have been established. Manchester United does not condone violence of any kind,” the statement mentioned.

Will Mason Greenwood ever play for Manchester United again?

After the online allegations, Robson’s father mentioned to the public, “She is devastated because she didn’t want it released. We have known him since the under 21s. He has been part of our family for two or three years. Their relationship has not been good for the last few months. She is completely devastated by it all.”

Once the Greater Manchester Police mentioned that they have took notice of the social media circulations, United announced that they would suspend Greenwood until further notice. That has been the case till now, after more than a year.

Many fans were calling for a faster verdict on the situation. However, the police took their time to view the evidence of the case. Now, the Crown Prosecution Service has charged the youngster with “attempted rape, engaging in controlling and coercive behavior, and assault occasioning actual bodily harm”. The official statement also mentioned that the defendant’s appearance will be on 17th October 2022.

Many reports also claim that the police arrested Greenwood today due to these charges and will continue to investigate. Despite various rumors of the pair getting back together, mainly because they followed each other on Instagram again, the case seems to have taken a drastic turn.

You may wonder why it has taken more than a year to charge Greenwood despite Robson presenting evidence. But the truth is that all the facts from both sides had to be identified and analyzed during this time. However, they have decided to charge the former Man Utd young superstar. We can only wait and how this plays out for Mason Greenwood, Harriet Robson, and Manchester United.