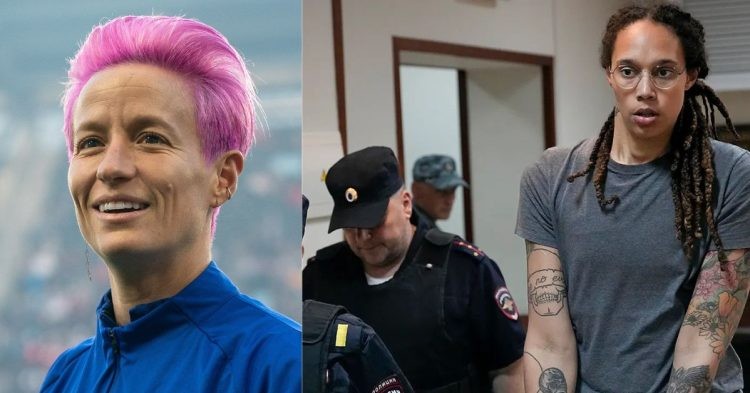 There’s finally good news for the USA as Brittney Griner, the American basketball star, finally returns home. Brittney Griner was imprisoned in Russia in August this year. Russia has finally agreed to release the basketball star in an exchange deal with the US government. The US government agreed to release Viktor Bout, the infamous arms dealer, in exchange for Griner. Megan Rapinoe, the American soccer star, also rejoiced at the news of Griner’s release.

Ever since the beginning of Brittney Griner’s ordeal, Rapinoe has been a constant source of support. Not only Rapinoe but other American athletes like Stephen Curry, LeBron James, and Dawn Stalley have also rallied for the release of Griner.

Even when Rapinoe was honored with the Presidential Medal of Freedom in July this year, she did not forget the plight of Brittney Griner. Reportedly, she took this opportunity to urge President Biden for arranging the release of Griner as soon as possible. During the award ceremony at the White House, Rapinoe sported a white blazer with the initials of Griner, ‘B.G’.

During the ESPY 2022 award ceremony, Megan Rapinoe was awarded the Best Play award. In her acceptance speech, the 37-year-old soccer star took a moment to remember Brittney Griner.

—Megan Rapinoe took a moment to acknowledge Brittney Griner at the ESPYS pic.twitter.com/5JDFj74bLS

Most recently, as soon as Griner’s release became known to the public, Rapinoe took to Instagram where she shared a picture of Brittney Griner, with the words, “Welcome home BG. We missed you. We love you.”

Why was Griner arrested in Russia?

Brittney Griner was arrested in Russia in August this year for allegedly bringing vape cartridges carrying a small amount of cannabis oil into the country. Although she was formally arrested in August, she was detained in Russia since February 17. It was reported that Russian customs officials detained Griner at the Sheremetyevo Airport outside of Moscow after finding the vape cartridges in Griner’s belongings. Griner was returning to Russia to play for her club team, UMMC Ekaterinburg.

The Russian government announced that it had detained Griner on drug charges. The US government, along with the WNBA tried everything to secure Griner’s release as soon as possible. However, the Russian invasion of Ukraine in February this year delayed the proceedings of Griner’s release.

After undergoing trial, Brittney Griner was sentenced to nine years of imprisonment by a Russian court. Griner was transferred to a Russian penal colony in Mordovia. Finally, after weeks and months of negotiations, the US government got the Russian government to agree to a prisoner exchange deal. This deal saw the release of Viktor Bout, a Russian arms dealer, in exchange for the freedom of Brittney Griner.