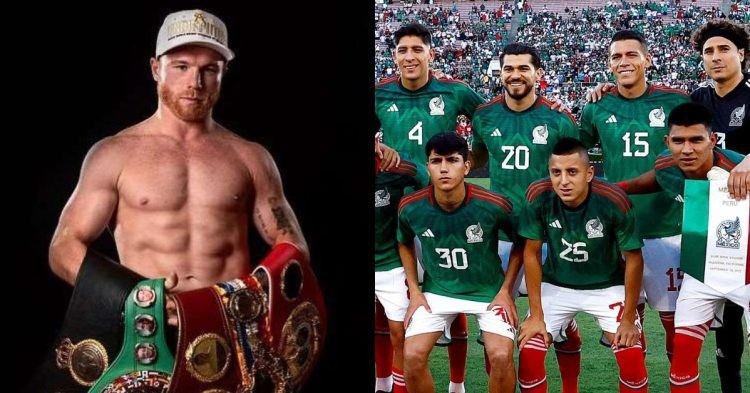 Canelo Alvarez is a Mexican professional boxer. He has had a very successful boxing career. His most popular fight was against Gennady “GGG” Golovkin, winning 2 out of the 3 matches and drawing one. He was speaking in a press conference a few nights ago, promoting his new drink VMC. He also spoke about his support for Mexico in sports.

Mexico begin their World Cup campaign against Poland on 22nd November, before facing giants Argentina and Saudi Arabia. They have finished in the Round of 16 every year since 1994. They have already qualified for the 2026 World Cups as they are hosting it along with USA and Canada.

Canelo Alvarez was speaking to the media ahead of launching his new drink VMC (Viva Mexico Cabrones). He spoke on 18th November and gave his predictions for the World Cup. Canelo said, “I might sound crazy but I bet for Mexico to make it to the final of the World Cup. I might go to Qatar. They invited me but it depends on my injury.”

Canelo has big expectations for Mexico at the World Cup 🇲🇽 pic.twitter.com/DxU036LMOq

Mexico’s group is not an easy one heading into the World Cup. Argentina are in amazing form and are favorites to finish top of the group. While Poland have not been very successful in big international tournaments their team is a strong looking one this time around. They will be competing with Mexico for the second position in the group, and secure qualification to the knockout stages.

Mexico announced their squad heading to Qatar on their Twitter page on November 14th. Manager Gerardo Martino announced Andres Guardado as their captain for the World Cup. Guillermo Ochoa, the goalkeeper very popular amongst football fans all over the world during the World Cup has also been selected. Raul Jimenez has also been selected despite playing just 4 matches for Wolves all season and scoring just one.

Waited 𝟰 years for this moment (screams in Spanish)! 😱🇲🇽🔥

The 𝟮𝟲 players who will be representing millions of Mexicans on the pitch at the 🌎🏆. ⚽️#MéxicoDeMiVida | #Qatar2022 pic.twitter.com/D3XDRhc8pl

Some have criticized the squad as being a bit old. Mexico’s best finish at the World Cup was in the quarter-finals back in 1970. They hosted the World Cup on multiple occasions, in 1970, and 1986, and will be hosting in 2026. A huge result for them came in the Russia World Cup 2018, beating Germany 1-0.