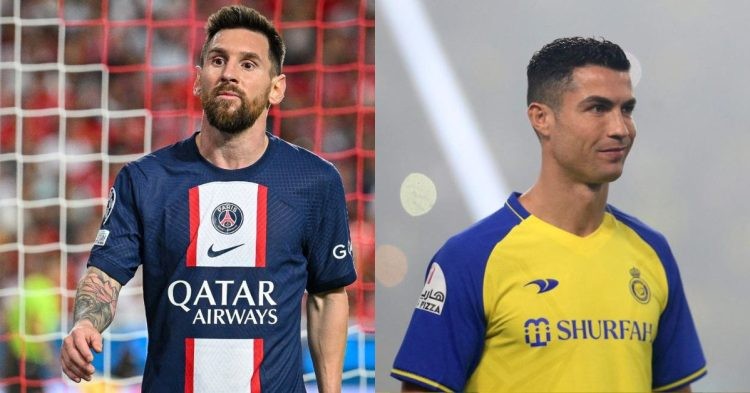 The soccer world still hasn’t come to terms with Cristiano Ronaldo leaving Europe and going to Saudi Arabian club, Al Nassr and now there is another explosive rumor coming from the Arab country, Al Hilal reportedly trying to lure Lionel Messi with a $300m contract.

BREAKING: Al Hilal, Al Nassr’s biggest rival, would like to sign Lionel Messi and are ready to offer him just under double what Cristiano Ronaldo is earning 🤑🇸🇦 pic.twitter.com/xZFuSSoFPP

Cristiano’s second stint at Manchester United ended in a toxic manner after his explosive full-blow interview with Piers Morgan and speculations around him moving to Al Hilal surfaced in the media, which was denied by his representatives earlier but was confirmed in late December.

Lionel Messi, on the other hand, recently completed his glorious trophy cabinet with a World Cup trophy, and reports of him joining Ronaldo in the Saudi Pro League have caught fire among their fanbases in the last 24 hours.

Money can buy Ronaldo but not Messi

Soccer fans have been divided since these reports came in and one fan wrote “Money can buy Ronaldo but not Messi”. Fans have attacked Ronaldo for choosing money over top-flight soccer while Messi is still playing in the top flight with PSG in Ligue 1. Ronaldo has been criticized immensely since his move to Al Nassr and fans believe that Messi won’t take the same path and won’t shun top-flight soccer.

Cristiano and Messi are set to face each other in a friendly clash after PSG confirmed that they will be traveling to the middle eastern country to face an all-star XI consisting of players from Al Hilal and Al Nassr but it will have to be seen whether Cristiano would feature in the game as he is undergoing a suspension after smashing a young fan’s phone after United’s match against Everton in April last year.

The fans took to the social media app Twitter and voiced their opinions about the rumor and wrote:

Why are you even posting this?? never gonna happen SMH

He’s not a finished GOAT.

Look, Messi and Ronaldo are both extraordinary athletes, and noone can begrudge them financial success. But they are both rich beyond imagination already. Surely they are smart enough to realise that there’s a quid pro quo here? One that does not enhance their reputations…

Messi can still win a UCL hence he doesn’t need to accept such offer. Ronaldo had no chance of winning it so, we can understand

It is being reported that the Saudi state will be backing Al Hilal financially to bring Messi to the Arab country in a bid to boost and promote soccer in the country just like Qatar did and it is pertinent to mention here that Messi is Saudi Arabia’s tourism ambassador and this link might help Al Hilal to finalize the deal.

The Saudi League has already benefitted hugely from the transfer of Ronaldo with Al Nassr’s Instagram handle reportedly going from 853k to 10m in hours after Ronaldo signed for the Saudi club, it will be interesting to see whether Messi follows Ronaldo to Saudi and they compete in the same league again.